After a series of successful comedies like No Entry, Sing Is Kingg, Welcome and Ready, director Anees Bazmee has come up with yet another entertainer, Mubarakan. Starring Arjun Kapoor, Anil Kapoor, Illeana D’Cruz and Athiya Shetty in lead, the film is a perfect blend of situational comedy and slapstick humor.

Unlike most comedy films where audience intelligence is taken for granted, Anees Bazmee has indeed made a comedy film which has an interesting plot and the comic elements come organically at regular intervals. The opening credits of the film sets the tone for the Anees Bazmee brand of comedy and the build up keeps getting better till intermission. Just when you expect the madness to explode in the second half, it takes a backseat for a considerable amount of time.

The narration hits a road block in the second half wherein drama takes over the comedy and the director attempts to get into the ‘Karan Johar’ brand by attempting to get the dysfunctional joint family together. After an extremely breezy and fresh first half, the second half slows down a bit as the humor is replaced by drama. Things do pick up in the pre-climax sequence when the entire confusion unfolds. While you expect an extremely over the top climax from Anees Bazmee, this time the director attempted to give out a very relevant message in the climax which most of us would relate to.

The Punjabi music complements the entire set up of the film however the album is devoid of any song that would last with us even after getting out of the theater.

We usually don’t use the term ‘A technically well made film’ when talking about a comedy, but in case of Mubarakan, the technical aspect does deserve a special mention. The sequences featuring Arjun Kapoor in a double role are shot quite well and the VFX is very neat. The film could have been shorter by 10 to 15 minutes as the editor could have easily shortened the emotional sequences in the second half. The screenplay and dialogues are the real heroes of the film as the situational humor is backed by witty dialogues. While a few dialogues fall flat, most of them bring a smile to your face. 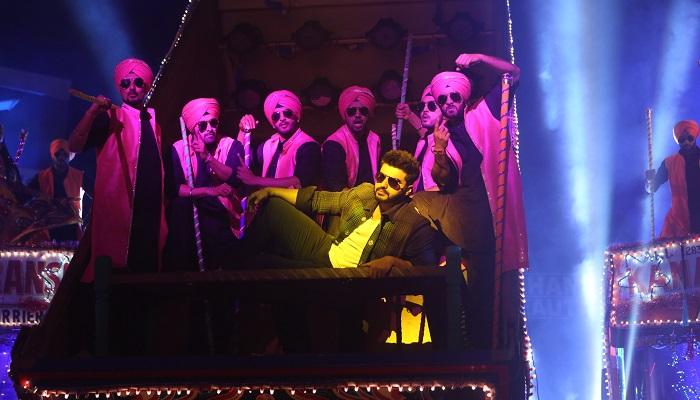 Arjun Kapoor does well to portray two diametrically opposite characters in the film. He manages to bring a sense of innocence to the character of Charan and the much needed swag to the character of Karan. Anil Kapoor is a RIOT in Mubarakan. He enjoys each and every minute of his screen presence and plays an important part in creating as well as resolving the big fat confusion. Pavan Malhotra is the surprise package of the film. It is a delight to watch a strong orthodox loud Punjabi character unknowingly become a part of the entire confusion. Illeana D’Cruz and Ratna Pathak do well in their part whereas Athiya Shetty didn’t have much to offer. The rest of supporting cast lent the necessary support.

To sum up, Mubarakan is a film that deserves to be enjoyed with the entire family. The second half  could have been a lot better, however the film has enough in it to entertain for 150 minutes. Go for it!