Only a few minutes into the film and you would realise that you are being taken for a ride. In one of the telling scenes in the beginning, Maharani Geetanjali (Ileana D’Cruz) decides to commit suicide as the government had confiscated her royal treasure. Her trusted lieutenant, Bhawani Singh (Ajay Devgn), himself escorts her into the river in a jeep (from falling in river to falling in love). By that time, I realised that logic is the last thing one should expect in this film.

Ajay’s entry is also worth mentioning here. Demanding the queen’s release, her supporters gather outside the police station. The police fires a gas bomb and everyone flees, but not our hero, who stays there and delivers “Chaar Din ki Zindagi hai or ye chautha din hai saabjee” and then Devgn does something quite bizarre to get himself behind bars (I will not reveal that).

Baadshaho is a fictitious heist thriller set in the Emergency era when the government had banned the privy purses of the royals. A whimsical spoiled brat from a family that ‘runs the country’ (which alludes to Sanjay Gandhi) orders confiscation of the treasure of Maharani Geetanjali, queen of one Rajasthan’s princely states, just because she resists his advances. 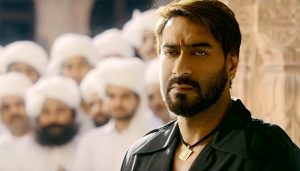 The queen is put in jail and the impounded gold is being transported to Delhi. Here comes Geetanjali’s Man Friday Bhawani Singh whom she orders to rescue the gold that would be used for poor and destitute. Bhawani hires a team of thugs – Dalia (Emraan Hashmi) and Tikla (Sanjay Mishra) who would help her rescue the gold. Maharani’s indebted friend Sanjana (Esha Gupta) also joins the squad (which I’m still trying to understand why). The task to transport the treasure is on a no-nonsense army man Sheher Singh (Vidyut Jamwal) who becomes a big obstacle for Bhawani and Co. Then there are twists and counter-twists which are quite predictable. By the time film ends, the audience would most likely lose interest.

The screenplay has been written in a haphazard manner, instead of a natural flow of conversation, the characters mostly interact in dialogues which are far from entertaining. It seems Luthria has taken his fascination for the 70s to an extreme level. Unlike The Dirty Picture (which was his best film till date), Baadshaho is missing in both story and substance.

There are many moments in the film that may challenge your intelligence. One being, the background score by John Stewart Eduri which doesn’t quite go with the flow of the film and threatens to rupture the eardrums.  While Baadshaho has no dearth of high-voltage action sequences, the story has too many loose ends.  The plot of Baadshaho is not only hackneyed, the entire film sails on exaggeration.

Devgn has been stereotyped as an actor with brooding eyes and intense persona and we have got used to it. However, this time he comes out as one of the saving graces in the film. Sanjay Mishra induced some funny moments into the film with his act of an ageing alcoholic burglar. Emraan’s performance as a playboy-criminal is passable but again he has been typecast into doing such kind of roles. Speaking of female characters, Ileana could not quite fit into the shoes of her character. She could be forgiven for her lack of expressions (like every time) but delivering simple dialogues too seemed to be a challenge for her. I’m still trying to process the reason why Esha was cast for that role or what the need of her character was in the first place.

So if you love high octane action without minding the story, then Baadshaho is a film for you. Ajay Devgn and Emraan Hashmi try hard to save Baadshaho, but plot is the real villain of this Milan Luthria film.