Actress Katrina Kaif was the special guest at the WeUnite conference, which marks UN Women’s partnership with the IMC Chamber of Commerce and Industry. While speaking at the event, the actress talked about marital rape and other kinds of crime against women. She stressed on the fact that most women fear to report or mention the crime that they have gone through. Here are the four important things that Katrina said at the event which makes complete sense:

I know of educated women who remain silent in the face of violence because they are afraid to break societal norms and have fingers pointed in their own direction, especially when the majority of our society fails to recognise marital rape as a crime.

On how women don’t speak up:

The world has largely been led by patriarchal societies and women have, through the years, largely chosen not to speak out against the atrocities they face.

On the unreported crimes against women:

India had a woman as the head of state, way before the United kingdom, a feat United states of America has not managed to achieve yet and this is why it is surprising to hear about gender inequality in India. And sadly we do. On a daily basis there are shocking stories about the violent crimes made against women. 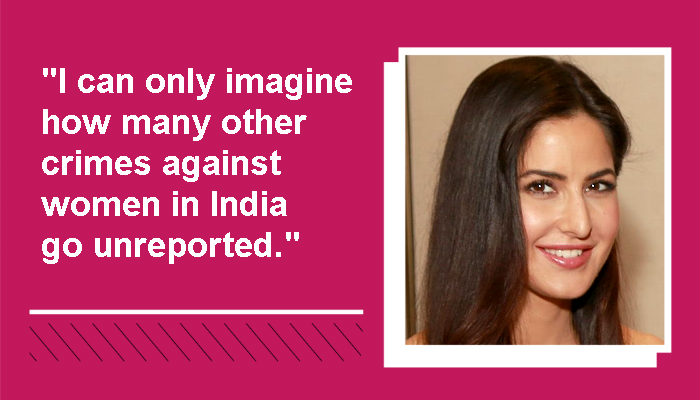 On how women are not inferior:

No region of the world, no country, no culture has secured women’s freedom from violence. I would urge more women to speak up. It is not okay to feel inferior or weak because we are not the weaker sex by any stretch of imagination.

On the increase in number of crime against women: