It’s 21St Century and people still don’t understand the meaning of feminism. Some equate it with male bashing while others (the likes of Parineeti Chopra and Katrina Kaif) simply refuse to associate themselves with it.
In the wake of Salman Khan’s sexist “raped woman” remark that caused a huge controversy and didn’t go down well with the feminists, SRK has jumped on the bandwagon too and has patronized women in the name of feminism.

During his interview with a national daily, Shahrukh Khan, when told that the director of the film Gauri Shinde and Alia Bhatt were overwhelmed with his presence on the set, said “I don’t want to sound pro-feminist and say that these girls have made a beautiful film yaar, but they really have”.
The statement is problematic on so many levels. As rightly pointed out by this Twitter user, probably the word SRK was looking for was “patronizing”, not “pro-feminist”. 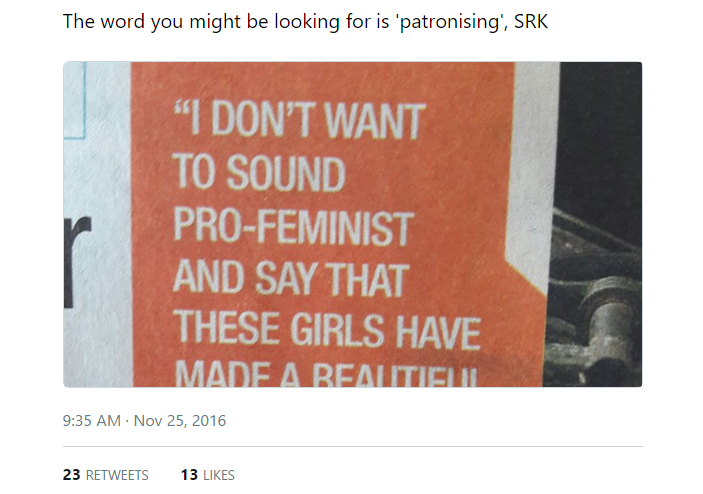 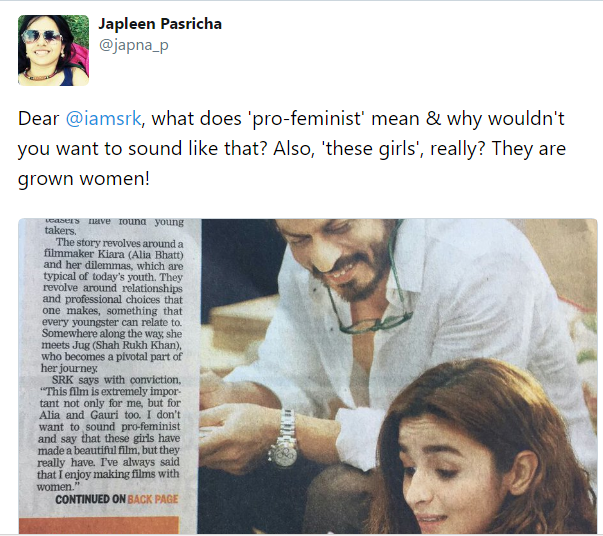 If only Shahrukh knew that being a “pro-feminist” isn’t about giving women credit just because they happen to be women, but demanding equal rights for women.

Shahrukh’s statement is a reflection of the tainted view of feminism- that it’s about celebrating women regardless of their merit and achievements and advocate their superiority over men which is far from true.
SRK not only patronized women in the name of feminism but also said that he doesn’t want to sound “pro-feminist”. Really SRK? Is “Pro-feminist” a bad way to sound? 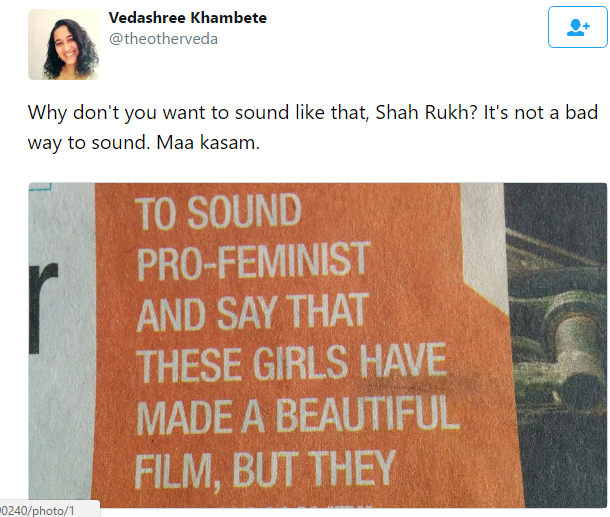 SRK is not the only one who doesn’t want to sound “pro-feminist”. Majority of the Bollywood actors and actresses (with the exception of a few – Deepika Padukone and Priyanka Chopra) do not want to associate themselves with feminism. These days Bollywood celebrities “come out” as feminists (Read: Twinkle Khanna) as if they are “coming out of the closet”. Being a feminist is nothing to be ashamed of. Anyone who advocates equal rights for men and women is a feminist and should not feel the need to “come out” in public and set the record straight.

What’s even more disappointing is that the Bollywood actresses (and actors) who identify themselves as feminists do not stand up against big names of Bollywood (Salman Khan, Shahrukh Khan) who have repeatedly made sexist and misogynist comments.

It’s high time someone from the industry took a stand against such comments. And SRK, it’s high time you stop patronizing women in the name of feminism. Feminism isn’t about giving women credits when they aren’t meritorious and being a “pro-feminist” is nothing to be ashamed of. All you need is a simple Google search to set the record straight.