Is something brewing in Dharma Productions? ‘The biggest BLOCKBUSTER ever!’, proclaims Karan Johar’s Instagram photo that has by now been doing rounds on social media. The picture is a Christmas-card like frame of Karan Johar, Aamir Khan and Shahrukh Khan in a single frame. As if that wasn’t huge enough, Deepika Padukone, Alia Bhatt, Ranbir Kapoor, and Ranveer Singh are in it too. What’s cooking, y’all?

While it might be a picture of a regular evening, fans are speculating whether there’s a Dharma Productions film waiting to be announced.

We hope that if the speculation turns out to be true, the story and direction is as potent as the cast.

The biggest BLOCKBUSTER ever!!!!!

Fans, of course, are legit losing their collective minds over it:

Some are waiting for a movie.

Okay, so there are some who chose to focus on a tear on one of Aamir’s sleeves, rather than the actors. Seriously guys? Such an eye for detail!

Others were surprised by seeing Shahrukh- Aamir, and Deepika, Ranveer and Ranbir in one same frame for obvious reasons. 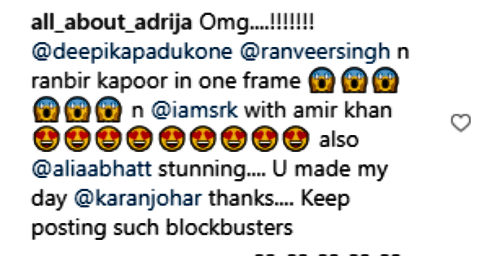 Salman Khan was missed too! 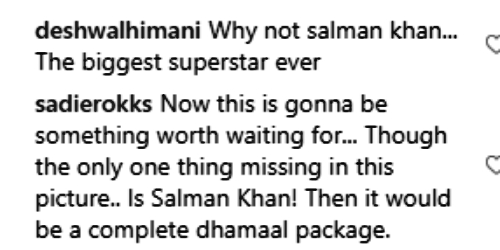