Judwaa 2 has recorded a healthy trend at the Box Office on the weekdays as the film raked in Rs 6.06 crore on Thursday taking the first week total to Rs 98.08 crore. The Varun Dhawan film has fared well all across with the best collecting circuits being Bihar, Mumbai, Delhi, Rajasthan and CI however, a circuit known to get audience in for comedy films i.e. Gujarat has failed to perform as per the expectations.

The comic caper is already a hit, however it would be interesting to see if it manages to escalate the status by emerging a super hit at the Box Office. The movie needs to breach past the Rs 136 crore mark to be  termed a super hit, which basically means that it should become the highest grossing Hindi film of the year by surpassing Toilet: Ek Prem Katha (Rs 133 crore). The trend in the second weekend would decide the final fate of the film, however as things stand today, it seems like a sure shot winner.

The first week collections of the film are the third highest of 2017 after Tubelight and Raees, which starred two of the top stars of Bollywood. 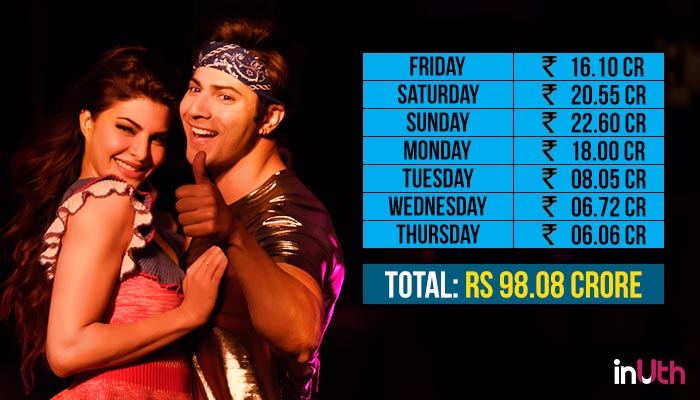 The all India distribution rights of Judwaa 2 were sold to Fox Star Studios for Rs 55 crore and the studio is certain to make ample profits from the film. Producer Sajid Nadiadwala too has got a table profit of over Rs 50 crore. The David Dhawan directorial is on its course to be the 8th consecutive successful film for Varun Dhawan, which makes him the most most bankable young star of Bollywood.

Judwaa 2 was received with negative critic reviews, however the positive audience word of mouth helped it not just record good collections in the weekend, but also sustain and emerge a successful venture.