Judwaa 2 maintained its exceptional run at the Box Office as the film raked in approximately Rs 18 crore on Monday, October 2, taking the four-day total to Rs 77 crore. The collections of this Varun Dhawan film were boosted due to the Gandhi Jayanti Holiday and now the real grinder begins from Tuesday, October 4.

David Dhawan’s comic entertainer has blended well with the Delhi, Uttar Pradesh, Gujarat, Rajasthan, Pune, Mumbai and Kolkata audience. The collections mellowed down towards the end of the extended weekend, i.e. October 2, which resulted in approximately 20% dip from October 1. The aftermath of the extended weekend may not affect Judwaa 2 if the film manages to cross Rs 6.50 crore. 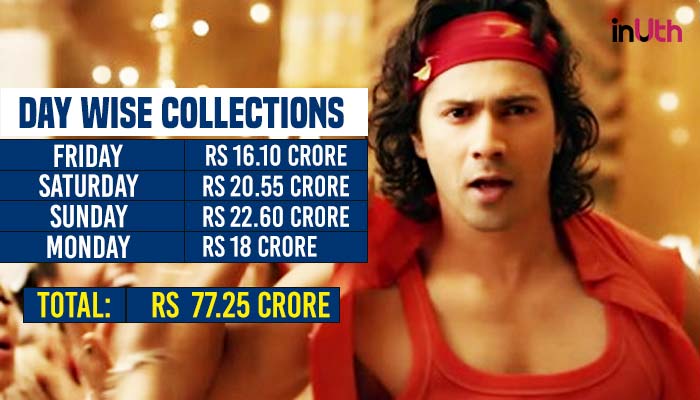 The all India distribution rights of Judwaa 2 were sold to Fox Star Studios for Rs 55 crore and with the collection so far, the film is likely to recover the investment and will be termed as a Box Office hit. What worked for Judwaa 2 is the no-brainer, over-the-top drama and slapstick comedy, as well as Varun Dhawan’s fan following coupled with Anu Malik style of music. The film did the trick for the audience who were looking forward to taking a break from the slew of serious drama releases.

While the critic reviews are negative, the audience’s positive reviews indicate that the movie might sail smoothly past the Rs 100 crore mark at the Box Office.