Vivaan Shah is just a few films old in the industry. After kick-starting in Hindi cinema with Shah Rukh Khan starrer Happy New Year, the actor is bringing his next titled Laali Ki Shaadi Mein Laadoo Deewana. The film, which also features Akshara Haasan, Gurmeet Chaudhary, Saurabh Shukla and Sanjay Mishra among others, is a romantic comedy. Directed by Manish Harishankar the family entertainer also deals with a quite fresh subject — premarital pregnancy.

Vivaan was in Delhi for the film where he talked to InUth and stressed on many things that the film offers. But more than anything else, he thinks that the issue that Laali Ki… deals with is of complete relevance. He says that while he plays a person in the film who is totally ‘spineless’ and runs away from his responsibilities, he doesn’t want the Indian youth to be inspired by him.

In Laali Ki Shaadi Mein Laadoo Deewana, Laali gets pregnant but her boyfriend, Laaddoo refuses to accept the child. Another guy, Veer, played by Gurmeet Chaudhary wants to marry Laali and just when they are getting married, Laaddoo’s conscious makes him realise that he can’t just let the love of his life go away like that. And therefore, he plans to steal the bride from Veer.

Also read: Rahul Bose’s biopic on Poorna Malavath does what MS Dhoni: The Untold Story and Azhar failed to do

Vivaan says that it’s a bit tricky subject to treat from a cinematic point of view. However, he is confident about the film because here, while there’s a strong message, it’s been wrapped with pure humour and entertainment. The actor elaborates:

I hope that this film creates some kind of conversation about the subject that we are dealing with. I hope it leaves an impression on the conscience of youth. It’s a very fresh subject. It also has got a great deal of humour. The entertainment value is very essential for the content of the film. Message films usually become little boring. I think it’s best to present a social message in the form of entertainment. I hope the youth enjoys the movie. Whether they take back the message or they think about pre-marital pregnancy is secondary, primary is that they enjoy is as a film. 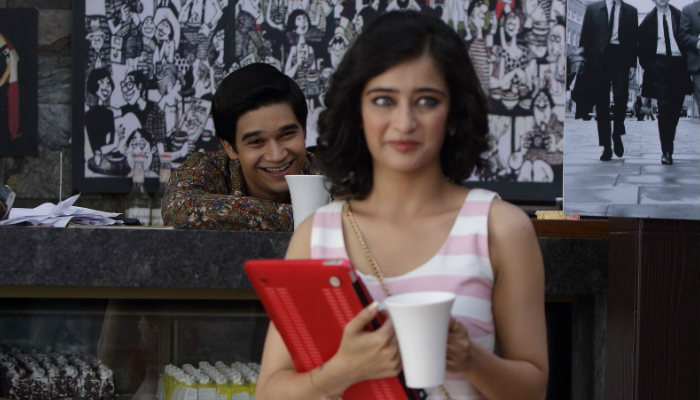 Vivaan might not have done a lot of commercial work but he finds his roots in the family which has tremendous actors like Naseeruddin Shah and Ratna Pathak Shah. Does he get influenced by what his father does or tells him? Vivaan says yes. In fact, he has invested full faith in the decisions that his father, legendary actor Naseeruddin Shah takes for him. He maintains:

His opinion matters. Whatever he says I should do, I make sure that I do it. It’s not that he forces me to do, but I’ll do it. He is the guiding light of my life. In couple of cases, it has happened that he had told me not to do something, I felt like doing it but then I realised he was right, I should have not ended up doing it.

Even though Vivaan is playing a man who’s dishonest and is not serious about his responsibilities, in real life, he seems completely opposite. In his own words, ‘I am not at all like Laaddoo, thankfully.’ The actor might have this brand of being the son of a stellar actor, but his stances are as of any other newcomer in the industry.