After portraying the role of an emotionally drained and grieving mother in Bejoy Nambiar’s Wazir, Aditi Rao Hydari is gearing up for the release of Bhoomi, where she will be seen playing the titular character. Talking about the plethora of distinguished characters she has essayed in a career spanning slightly over 6 years, Aditi says what pushed her to keep doing good work as an actress were the directors she’s worked with. In an interview of around 20 minutes, most of her answers mention names like — Omung Kumar, Mani Ratnam, Sanjay Leela Bhansali, the directors she has or is working with.

For Aditi, working with a director who is passionate about making good cinema and not just a box-office oriented film is of paramount importance. The actress seeks scripts where the characters are treated as the real heroes.

Besides talking about her experience working with Sanjay Dutt in Bhoomi, Aditi, in an exclusive interaction with us, opens up about her kind of work, the magic between action and cut, and where does a dance number become important in a film. Excerpt:

Aditi, you had earlier mentioned that it was emotionally challenging for you to play a woman who was being both mentally and physically abused in Bhoomi. Please elaborate on that.
I didn’t say what is happening to her. But, I did feel very very tortured and I did feel very humiliated and I used to feel very very wretched on most days because it’s just really hard when you are constantly doing scenes that require you to be in a certain kind of mental space. I am pretty much a ‘switch on- switch off actor’. The moment the camera has turned off, I am monkeying around a corner. But, with this film, because we were shooting really fast, there was no time for me to even monkey around a corner. It was just one scene to the next and it was quite heart-wrenching.

But, doesn’t it add to your craft as an actor, because you’re playing a character which demands more emotional investment from you?
Of course. As an actor, you want to be given challenging situations. At least, I want to work with these amazing directors who will push me and who will not let me be complacent. I like to be pushed. If I am not being pushed I feel like I am not working. But, that feeling of being wretched and humiliated is not a very nice feeling. I was determined that I won’t let that come in my way. It’s (Bhoomi) a very important film and a very important story to tell. Also, not every day was like that because there were amazing moments in the film. There were songs and other things. And then there were days when Sanju sir (Sanjay Dutt) and I were there. Those scenes were a lot of fun. 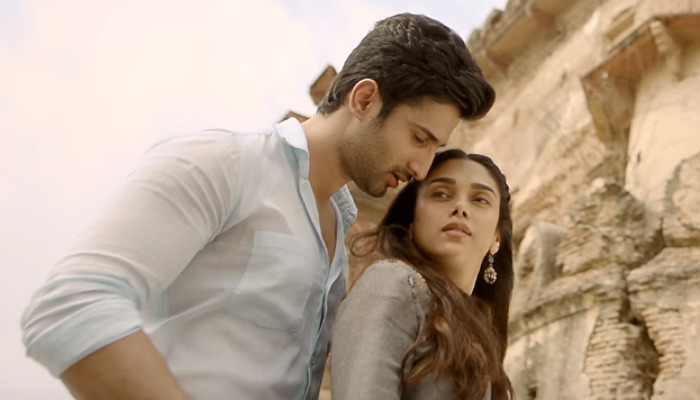 Aditi Rao Hydari in a still from Bhoomi

Are you telling me that you’re completely a director’s actor?
Yes. I have worked for six years now and I have slowly discovered that because I don’t have any background in films. And I realised that about myself in the last couple of months since I worked with Mani sir and Sanjay Leela Bhansali and now with Omung Kumar, that for me, the director is very important. There are some people who make projects and then there are some directors who make cinema. And I would want to work with directors who make cinema, which lives beyond years, which are kind of films which you keep going back to. 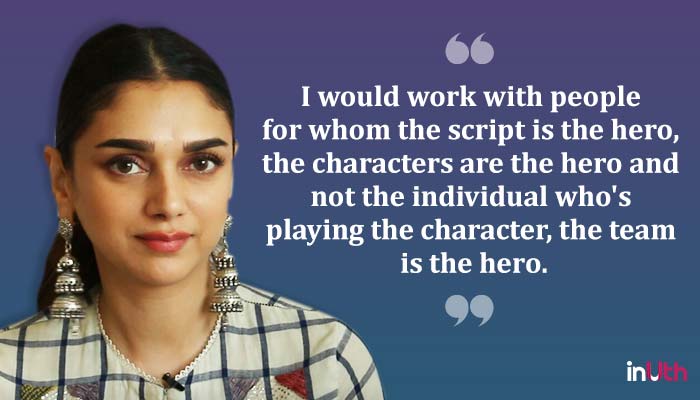 Where everybody is brought because of the value that they add to the film. I want to work like that because I think I thrive in that environment and it brings out the best in me.

Bhoomi, apart from being a story of a father-daughter relationship, also talks about crimes against women. But, on the other hand, you have a dance number, which is objectifying a woman. What is this contrast?
You know these are called item numbers. First of all, they shouldn’t be called item numbers.

Also read: Photos: Aditi Rao Hydari’s latest photoshoot is a reminder that she looks gorgeous in everything

Where do you draw a line between a dance number which is essential in a film and the one which is not, then?
See, these are very fine distinctions and it honestly depends on the intention of the filmmaker. In the case of Bhoomi, I’ll tell you and I am not defending my own film. There are certain places where women and men are dancing and people are sitting and watching them. There are strip clubs and there are many kinds of things. Now that ‘feel’ somewhere adds to what is happening in the film, because those guys are there. They are drinking.

They get a sense of confidence or overconfidence where you feel like you’re the king of that place and you can throw money at a girl and she’ll dance for you. It does somewhere mirror the society. These things happen. So, it becomes what your take away from that scene is and also what’s the intention of the director is. Is it to titillate you or is it a situation that demands this?

Aditi, you have worked enough to understand the dynamics of the industry. Do you think you or other actresses get a lot of work to justify your craft? Are there roles being written for actresses in the industry?
No. I am not satisfied. I have been constantly asked this question of ‘you haven’t gotten your due,’ ‘you have been underutilised.’ I am like ‘why are you asking this question to me?’ I am an actor. I am dependent on people for bringing those stories to me. I will be there 800 % if you’ll give me something to do. And I am always there. I love my work. It’s not the fame and the fortune that drive me. Of course, I love that too. But, that magic between action and cut, that drives me. I am not grown up on sets. So, it’s magical for me. But, give me that work. 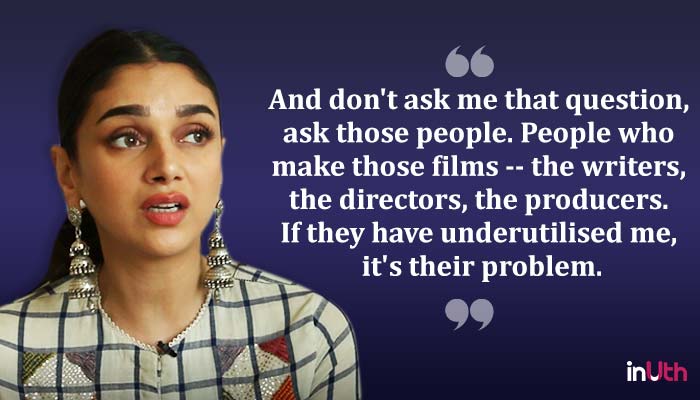 Having said that, I prefer not to crib. I reached Mumbai in 2010 and by 2010’s end, I was working in a film. In these last 6 years that I’ve worked, I have worked with Bejoy Nambiar, Vidhu Vinod Chopra, Mani Ratnam and all these amazing directors. And they are all people who have brought me on for something they have seen me and for something I can bring to the table for them.

But, is working with big directors enough for Aditi?
It’s not running after a big director or a big hero. There’s no hero who recommends my name. It’s directors who feel that I can bring something to the story. A director is the captain of the ship. If you have a good director, who is interested in making a cinema, for him the script is the hero. They will be true to the characters. They will be true to the team. However junior you are, they will give you that love and respect that you deserve. They will also push you and challenge but I am up for that. It’s not about the big director. It’s about good directors.

The name doesn’t drive me, the passion of directors drives me. There are many big directors who are making big projects and they are making a lot of money. Of course, I would love to work with them also, because it’s nice to get different kinds of work. But, if you ask me truly what I want to do, I want to work with directors who would bring out the best in me and inspire me to be the actor that I want to be. I believe that the art is bigger than you.