After films like Shahid, Aligarh, and Citylights to name a few, Hansal Mehta is gearing up for the release of Simran, which he defines as an entertaining film with a lot of quirk and thrill. Ahead of the film’s release, the director while interacting with us revealed that Simran would not have been possible without Kangana Ranaut.

Mehta believes that the number game has spoilt the Hindi film audience who now watch films based on the business they have done.

What made you chose Kangana Ranaut for Simran?
I couldn’t have made Simran with anybody else. I have been wanting to work with her ever since I watched Fashion. I realized that if there is a true actor in this generation, it has to be Kangana Ranaut. I have worked with Rajkummar Rao, who spoilt me because of his dedication to acting. So I always prefer working with actors. I had to work with somebody of that caliber. With Kangana, she is a great actor and has an x factor which makes her a star. (sic)

After Fashion, did you ever approach her for a film?
One was a human interest story, two were biopics. I was supposed to make Sarabjit with Kangana but it didn’t happen. I went abroad and things changed overnight with somebody else directing it. I was out of the project. It is a good thing that we collaborated on Simran because it is a very engaging and entertaining story. As a director, you have to move away from your own cocoon. 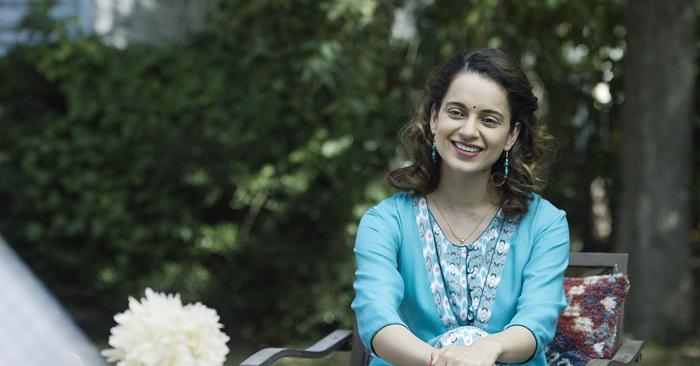 Kangana has written additional dialogues and screenplay of the film….
(Cuts In) When Shahid won the best dialogues award, the writer went up and said this award should go to the actor. So it is a part of that process where everyone interprets the script in a different way. It is a collaborative process.

Is there a dark side to Kangana’s character in the film?
It’s not dark, there is a flawed side to her. It is a gloriously flawed character. It is a character full of flaws, but the film essentially focuses on the undying spirit of the lead character. One side there is crime and other side there is never give up category. It is a film about love, happiness, crime and redemption.

After the failure of Katti Batti and Rangoon, do you think it is essential for Simran to do well at the Box Office?
I have never fallen trap to this Box Office business. I keep asking people, ‘have you ever asked Levis how many jeans have they sold this week?’. I often believe that we should not equate movies with crores. We are telling stories, and we need to embrace the stories. Cinema has been trivialised into crores. I don’t understand why Box Office game is for public consumption? They should watch stories and not care about numbers. I think, all that should matter is recovery and reasonable return over investment.

Also Read: Kangana Ranaut finally talks about something which is not related to Hrithik Roshan, Aditya Pancholi or her struggle

But what do you have to say about the failure of her last two films?
For me, none of that matters. For me, she is a star. We went to Ahmadabad recently and the amount of crowd that she drew and attracted was just phenomenal. The crowd loves her for the way she is. I am successful till the time people like my film.

Are you upset with the fact that people are talking about Kangana Ranaut’s personal life more than Simran?
You are not asking about Simran. She is answering the questions that are posed to her. I take great pride in it that there is somebody who is not afraid to answer tough questions.

Also Read: I knew that Sultan would be a blockbuster, but don’t regret rejecting it: Kangana Ranaut

What’s the screen count and run time of Simran?
It will be a very healthy screen count. The run time is around 2 hours. A little more than 2 hours. We have got a U/A certificate. There are a few cuts but I won’t hold the CBFC responsible. They are just following the guidelines.

Simran is slated to release on September 15.