After Sanjay Leela Bhansali’s Padmavati and Sandeep Balachandra Patil’s Dashakriya, Hindutva groups are now protesting against Sunil Singh’s Game of Ayodhya. According to the Indian Express, RSS backed Hindu Jagran Manch are protesting against Game of Ayodhya and blackened the walls of Singh’s house in Aligarh, Uttar Pradesh. The movie’s countrywide release is slated for December 8. Ahead of the release, Sunil Singh was scheduled to visit Aligarh Muslim University for its screening but was unable to do so due to protests.

I’m awaiting permission to visit Aligarh Muslim University now. I wanted to screen it on December 6 but it has now been stalled after the protests. It has now become a trend and these groups have started protesting against every movie without even watching it. Some groups are protesting in Shamli as well and burning my effigies. They have also kept a prize money of Rs 1.25 crore on me. 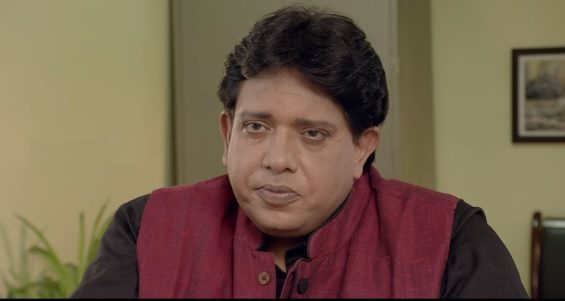 Director Sunil Singh in a still from the movie

The protestors, who have watched the movie’s trailer, say that the movie has ‘distorted facts’. As per the report, Sanju Singh, the state secretary of the Hindu Jagran Manch, said:

I have seen the film’s trailer. It has been shown that there was no temple at the site and idols were placed later. We will not allow screening of the film in Aligarh cinemas. I have warned owners of cinema halls that if they screen the movie, and if any untoward incident takes place, it will be their responsibility.”

As per the Times of India, Yogesh Varshney, HJM’s city president threatened:

Today we have blackened the wall of Singh’s house. If he doesn’t back down, we will kill him.

The movie trailer shows that the story is based on true events. Sunil Singh and Saroj Entertainment Pvt Ltd, the production house producing the movie maintain that ‘the movie is based on the Liberhan Commission report and the stock footage from various sources.’

Set against the backdrop of Ayodhya’s Babri Masjid and Ram Temple issue, Game of Ayodhya is a love story of two individuals. Although the name of the movie seems inspired by the popular American series Game of Thrones (2011), Sunil Singh denies it. “I penned the story in 2014. Started shooting in 2015 and finished it by 2016. The movie has been shot in Faizabad, Ayodhya, Lucknow and Mumbai,” Singh added.

Watch the trailer of the movie here: