A large duration of the month of September was all about Kangana Ranaut and her explosive statements. While on a promotional spree for Simran, Kangana was seen in her unabashed self as she talked about her struggles, career and her alleged relationship with Hrithik Roshan. Her words made for great tabloid headlines and the Hrithik Roshan-Kangana Ranaut controversy was once again scrutinised by the public. As it turns out, now it was Hrithik Roshan’s turn to talk about his side of the story.

In an interview to Republic channel’s Editor-In-Chief Arnab Goswami, Hrithik revealed a lot. Earlier this week, when Republic got its hands on the emails which Kangana allegedly sent Hrithik, the channel discussed this matter in great detail. Soon, Hrithik’s lawyer Mahesh Jethmalani accused her of stalking the actor in a 29-page complaint submitted to the investigating authorities. After this Hrithik took to Facebook explaining how this entire incident affected him. The actor also claimed he never met Kangana beyond their professional commitments and asked why a high-profile case missed the eye of paparazzi? 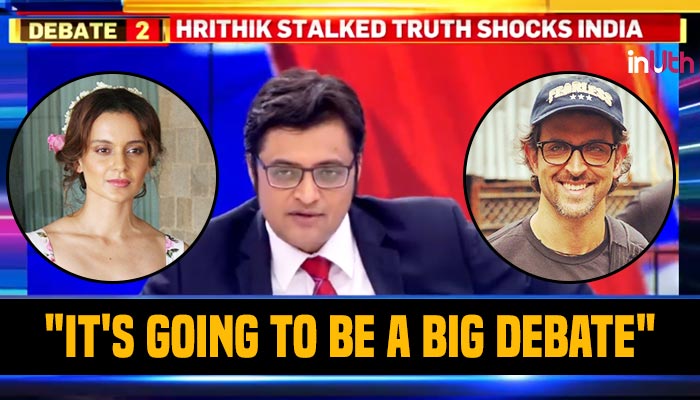 The interview which Hrithik gave had all of this and much more. He spoke about how calm his demeanour was and why staying silent was a decision he took all these years. We saw the entire interview and have collected interesting statements which Hrithik made in his defence. Have a look:

On finally breaking his silence:

I am not a victim. I know anything I say can be used against me. Let me tell you one thing about myself- I am not a person who likes to confront. I never had a single fight in my life. Even in my divorce, there was no fight. I know there is no grace in sitting here and testifying for my character. If I come strong they ll term me as aggressive, otherwise either weak or say I am seeking sympathy. It is all confusing. If a person abuses me, I think it is dignified to walk away. If someone hurls stones at my house then it is important to speak up. I have been harassed for 4 years. 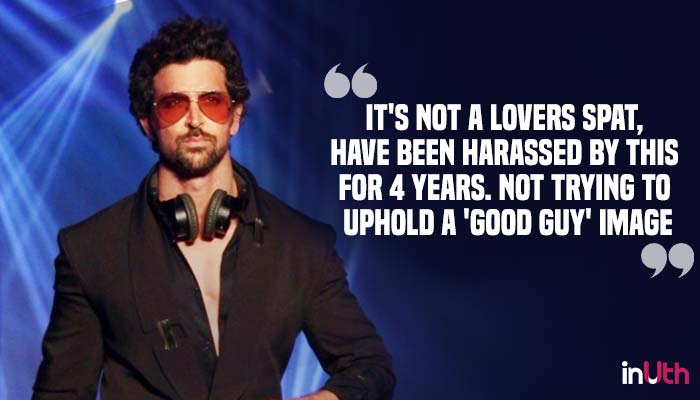 I first met Kangana in 2008 when we started shooting for Kites. We did not become good friends. I found her to be extremely professional and I was really proud of her. She was giving the camera everything she had and that made me joyous. An actor is giving my movie everything they have and that makes me happy. I may have mentioned her sometimes that she is an incredible actor. Kangana said she was inspired by me at a young age and wanted to be an actor because of me. The other exchanges which we had were the issues which she had. For example, she wanted to improve her language and telling her my story helped her. There was no ‘seeking solace’ or relationship. There was nothing remotely romantic. I wonder if my need to please actors may have led her on somewhere. She used to send videos to me if she achieved a feat like doing a somersault at the beach and I complimented her. If by saying good things I am at fault, then so be it.

Knocking on the door:

We were shooting for Krrish 3 in October 2012 and she wanted my help in understanding what do in life? I told her I was tired and went back to my room. There was loud thumping on my door and I saw through the keyhole she was there. I felt she was not in a right state and I called my assistant and asked her to call her sister and take her to the room. The next day Rangoli apologised for her behaviour and I said it was okay. I said I would not judge her, And that was it. I asked Rangoli to tell her sister to feel free to come and chat with me. Another year passed and we didn’t talk. I had forgotten about it. But I became aware and I thought to not be friendly and maintain a distance. We spoke at the promotions of Krrish 3 we all were there, I have never met this person one-on-one my entire life. 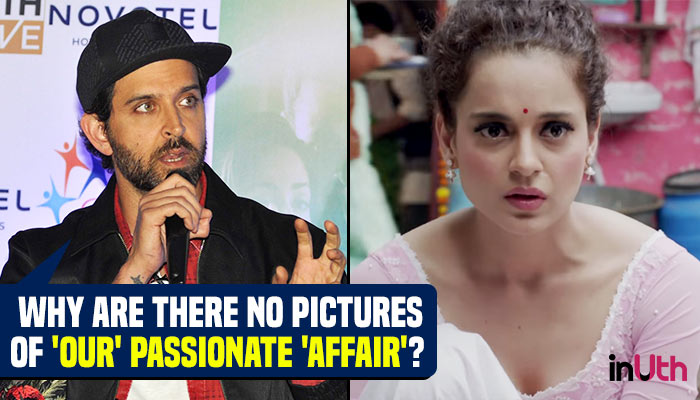 Also read: Hrithik Roshan-Kangana Ranaut row: Can a woman be tried for stalking? Here’s what the law says

When I learnt about there was news about me proposing marriage to her, I was relieved. I knew people would know the truth. I didn’t leave the country in January 2014. In December 2013, I was in the US for a few days.

On all the brouhaha around this:

It was such a hostile environment for me to come out and talk. You think I didn’t try? Up until now all of this was that was being discussed was in third person. It was always a close friend. And it could be denied any second. The close friend could say the engagement did not happen in Paris but any other place. All these questions about the engagement, the affair and all are very good questions but these need to be asked to the person whose narrative that is.

On the start of emails:

I met her on 24 May 2014 and she asked me how I liked her film Queen? When I said I hadn’t watched the movie, she said I sent her an email in the morning praising her. I told her I did not send her an email. She was upset and run-off. I got a barrage of messages from her on Blackberry the next morning. The messages were all in Hindi and all abusive. I thought she had lost her phone and some guy was playing a prank. There was a mail from Rangoli and I was completely blown away. In the first, she accused me of hacking Kangana’s account and all such things. Rangoli asked me to not misuse the pictures and videos, she had sent me. I had no idea what she was talking about. I said please come and meet me. I called my IT guy Mr Lamba and realised she was communicating with an imposter. I texted Rangoli to not get worried and I told them we’ll catch the imposter. In another email she accused me of emotionally and physiologically raping Kangana. That is when I said I need to be away from this mess.

On the ‘impression’ Kangana had:

I got an email in which she said, “Before I send you any message, I want you to tell me which medium we should use to communicate.” The first emails I received on my personal ID were I miss you and then there were explicit emails. I started to send them to spam. MacBook Pro did not give me an option to block it. I have read about 40-50 emails out of 3000 of them. Till then it was all in the email, but then the harassment became public.

On the hacking and distancing himself from it:

Hacking is not easy. I am no hacker. If you see the emails it recounts the happenings of her entire day, the people she met and all. How can I know all that? People are assuming I was in a relationship with her when they suggest hacking. But there was no relationship. This is the first time in my life that I have received such emails. My higher understanding of life told me to ignore. I think ignorance is the best way to discourage anyone. This is not the first time, I have received umpteen number of emails from random people. The effect that my conversation of Rangoli had on me when she used words like rape, enabled me to distance myself from this drama. At that point, if I would have replied, God knows what would’ve happened. 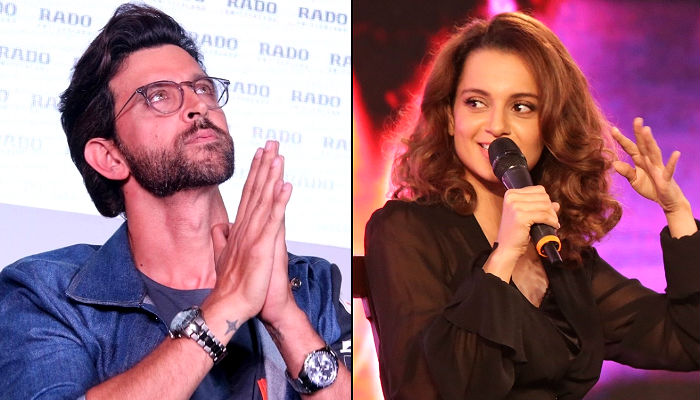 On the picture and the aftermath:

At first, when that picture I came out, it was exposed the very next day. All my friends tweeted pictures of different things we were doing. It was an enactment where we were all having fun. It has been photoshopped. Until this point, the harassment was not out to the public. And then I started learning things. I started meeting people when they started asking about our relationship. I didn’t know how to react. I met big names who told me my ‘girlfriend’ stopped them from sending me invites for movie screenings. I became desperate. I wanted people to believe it was untrue.

Also read: Hrithik Roshan’s side of the story: 5 hard hitting questions he asked Kangana Ranaut in his viral Facebook post Mind you, I do my fact check. She was specifically asked to comment on my name. She was asked Hrithik ousted you from Aashiqui 3 and she used the silly-ex comment. That was when I decided I need to speak. I was not ina good state of mind. She not only established we had a relatinship she also made me a small-minded person who could not move on. No one really knew how much  I tried reaching out to her, through Rangoli or her friends. But it was in vain. That is when I decided to send a legal notice. It was not a threat. It was simply to tell her in the most civil way to stop what she was doing.