I may not be your biggest fan or critique but since it’s your birthday, there’s something I’ve observed about you which I want to tell you. There’s a slight note that I’ve made about you and I’m pretty sure that your fans and people who have been closely following your work would also agree with me.

Anushka, you have got a brilliant sense of choosing roles for your films. Yes, you may have debuted from a character which appears totally opposite of how you are in real life. But, your choices of characters post-Rab Ne Bana Di Jodi completely reflect the personality and the kind of woman you have gone on to become. I am telling you this because I, myself, have been closely keeping a strict watch on your work. And the best part of your work is that you have never looked at any character of yours by gauging the screen time you have in a film. I think that kind of shows the self-confidence an actor has in his/her craft or acting prowess.

Honestly, I didn’t like Rab Ne Bana Di Jodi. No qualms with any big actor or director, I just felt that the story itself wasn’t enough logical to keep me engaged. I also could never warm up to your character because I could never think beyond why it was so difficult for an educated, well-read Tani Ji to not recognise that her dance partner was actually her husband. Anyway, why I am upset with RNBDJ deserves a separate write-up I think. It’s your birthday, let’s talk about you.

Also read: Photos: Anushka Sharma shoots in Mumbai for Imtiaz Ali’s next. Can you spot Shah Rukh Khan in it?

So, I wanted to praise you for your sense of working characters that talk about all kind of women — romantic, tough, shy, bold and in all sense lovely and beautiful. You did Badmaash Company and told me how a woman can totally take the ownership of her mistakes and still live a dignified life. The moment Bulbul got to know that her man is not a deserving father, she left and didn’t shy away from taking the sole responsibility of her child. Then you did Band Baaja Baarat and totally blew away my mind. Actually, you were playing me. A typical Delhi girl with big ambitions but chhotu steps and a totally fucked-up heart, trying to make her family feel more luxurious and happy about having a daughter like you. In your film with Akshay Kumar, Patiala House, you played this woman who always tries to give her man enough courage and motivation and also pushes him to pursue his dream. I liked it, yes, because being a woman also means making other people around you grow.

When you did Ladies Vs Ricky Bahl, I took it as just any other boys vs girls film, and I was not at a fault. It was promoted like that. But, when I watched the film, I liked it because your character showed me a real hardworking young woman trying to live a dignified life by earning her own livelihood. And actually, Ishika Desai was a real female full-fledged character in a mainstream film which justified — “Koi kaam chhota bada nahi hota.” You were inspiring.

What do I even say about Jab Tak Hai Jaan? Your role in told me that it’s fine to love and not be loved back. Like, life doesn’t end there and you need no specific reason to be happy. You being you is an enough reason to celebrate your life. I still watch (and not just listen to) your ‘Jiya Jiya Re Jiya Re‘ with my little sister and we happily dance to it. Mood changer it is.

Okay, so in your next, Matru Ki Bijli Ka Mandola, you again showed up as a tough woman. Of course, it was a Vishal Bharadwaj film and I trust him to offer some seriously amazing female characters in his films. Then came the time when you left me speechless. PK and NH 10 are two of the most wonderful kind of cinema Hindi film industry has ever produced. I saw you in PK and loved you instantly. You were a woman who knows how to do full justice to your salary and job. You found a story and beat the shit out of it and presented the truth, something that we, journos are ideally made for. NH 10, your production debut, actually quite disturbed me. But I was amazed to know how you took up a subject to present in mainstream cinema which is easily considered more suitable for a documentary film or a serious news report. The film still is a milestone for your acting career.

Bombay Velvet made you appear so fearlessly sensuous on screen. I don’t think any of your characters before portrayed you in such a sexy avatar. Then, with Dil Dhadakne Do and Sultan, you proved why you can afford to be not on the screen for a long time and still leave an impact. In both the films, you played a woman who doesn’t need ‘love’ just for the sake of it and no man deserves you if you are not the one he loves more than anything else in the world. Your last film that I liked was Ae Dil Hai Mushkil, and it is also one of the closest films to my heart. I feel emotions and relationships are the real things in life and films should talk about these things that make us all human. You showed me how it’s fine to not love back the person who loves you because you can’t fake emotions.

I had little problems with Phillauri. That again makes for a separate article but I liked how you played the most loving ghost in Hindi cinema. And also, as a ghost too, who is probably more than 100 years old, you were completely on for the rights of a woman. You told the groom what his bride deserves in him.

In these 10 years of your career, you have done everything from a typical Masala Bollywood film to something that conveys a lot to the world of women outside. I just want to tell you that never stop looking at your characters and see what they are offering to the society. You are doing some exceptional work with both acting and producing, Anushka. Yes, we might be “mediocre” enough to take anybody or everybody as a star, but you, by all means, deserve being called a one. 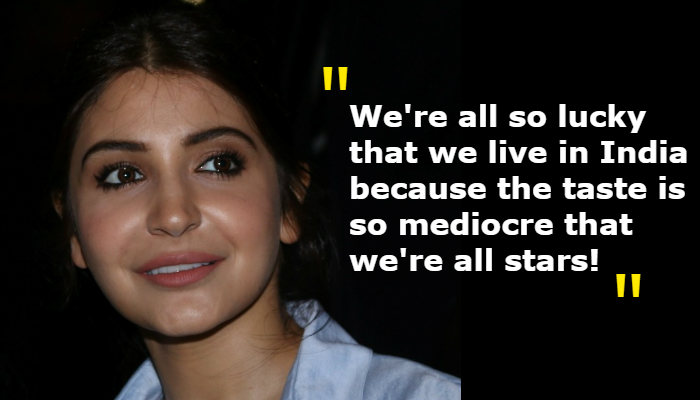 And oh, did I wish you a very happy birthday?