Aamir Khan’s Dangal is the film that has set new benchmarks in Bollywood. It has become an example of how Bollywood movies should be- rich on content, delivering a strong message and breaking Box Office records. With its amazing run at the Box Office it now stands at a total of Rs 361.81 crore in the domestic market. On the fourth Friday since release , Dangal minted Rs 1.94 crore. This has been the lowest Friday collections since 23 December.

However, it can’t be negated that the trend would go up in the coming weekend.

On the first Friday, Dangal earned Rs 29.78 crore, on second Friday Rs 18.59 crore and Rs 6.66 crore on the third Friday. The dip in the numbers every Friday was obvious with time. 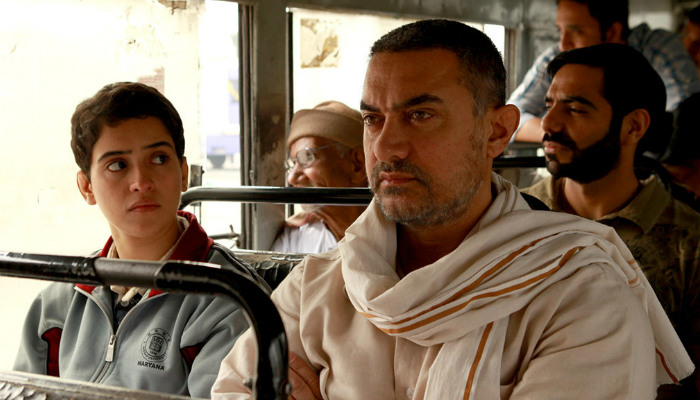 Aamir Khan and Fatima Sana Shaikh in a still from Dangal

But, this doesn’t mean that Dangal’s would stop minting money at the Box Office. The buzz around this Nitesh Tiwari directorial is still strong so the lifetime collections would obviously be more than what has been recorded till today.

Based on real life inspiring story of Mahavir Singh Phogat, Dangal imparted important lessons on women empowerment to the society. Not only Aamir, but the acting of his on-screen daughters Fatima Sana Sheikh and Sanya Malhotra too was appreciated both by viewers and critics.

Also read: Despite getting national recognition, Dangal girl Zaira Wasim remains unrecognised in her own Kashmir

In the beginning, it looked like Dangal’s  motive was to unseat Salman Khan’s Sultan from the biggest hit of 2016 pedestal. But, with time  one thing became evident- that Aamir isn’t competing with anyone else but himself. It was Mr. Perfectionist who set new benchmarks in the industry and it was him who stumped them all.