It shouldn’t come as a shock to you by now that Aamir Khan’s Dangal is the biggest blockbuster of this year. Since its release on 23 December, all Dangal seems to have done is break Box Office records one by one. In the beginning, it looked like Dangal’s  motive was to unseat Salman Khan’s Sultan from the biggest hit of 2016 pedestal. But, with time  one thing became evident- that Aamir isn’t competing with anyone else but himself. It was Mr. Perfectionist who set new benchmarks in the industry and it was him who stumped them all.

In the year 2008, it was Aamir’s action psychological thriller Ghajini that opened the Rs 100 crore club. Made on a budget of Rs 45 crore, it set benchmarks for many Bollywood movies to follow. Though, it has been seven years since the club was opened, entering it is considered a standard to decide if movies did well at the Box Office even today. Over the years, entering the coveted Rs 100 crore club has been a dream for many filmmakers and actors. So much so, that even an evident filmmaker like Karan Johar made his debut in the club this year with his last release Ae Dil Hai Mushkil.

If starting this 100 crore club wasn’t enough, Aamir gave another target to Bollywood industry when his 2009 release 3 Idiots earned Rs 200 crore. It became the first Bollywood movie to achieve this feat and it is estimated that worldwide lifetime gross collection of this movie was Rs 339 crore.

Next, Aamir Khan starred in a movie titled PK which scripted a new history once again. The movie opened the Rs 300 crore club (earning Rs 340 crore in the domestic market) and of late there was a competition between PK and Dangal, for the all-time highest grossing movie of Bollywood. The sports drama defeated PK  as it inched towards earning Rs 350 crore on Tuesday. 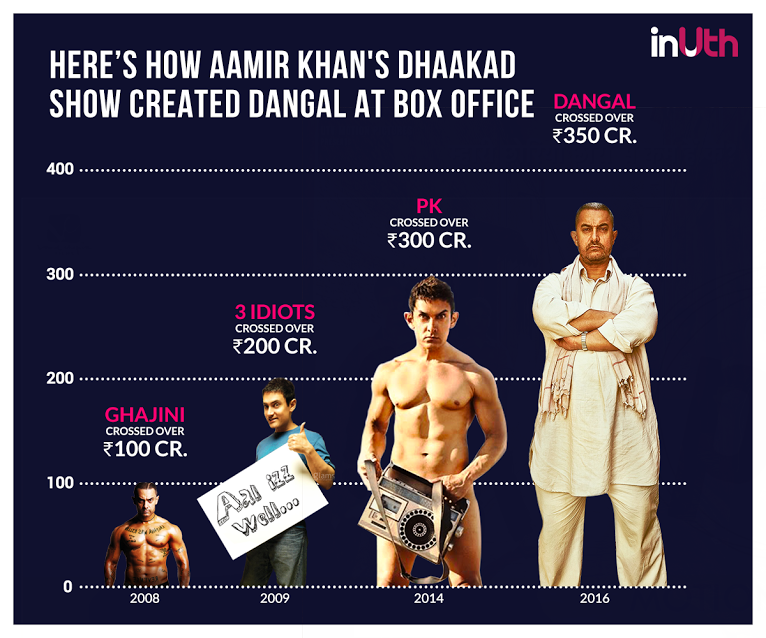 Here is what trade analyst Taran Adarsh tweeted about this feat:

With this achievement, Dangal has become the first Bollywood movie to earn Rs 350 crore at the domestic market.

Though the statistics make Aamir the undisputed king of Box Office, it should also be noted that all these movies are rich in content. These films don’t seem vague and they perfectly blend content with popularity. All these factors write few words clearly on the wall: Aamir Khan is a treasure for the film industry.