Are you stuck with a job which you utterly dislike? Have you been trying to lose weight since ages but surrender before junk food? If it’s the case, you are on the same page as Noor.

We are talking about Noor, a character essayed by Sonakshi Sinha in her upcoming film of the same name. The Dabangg actor is playing a journalist in the film which hits the theatres on April 21. In case you book the tickets, here’s an A-Z about the film which you should know.

Noor is the story of a 20-something journalist who is struggling in her job. Her personal life is no less painful as the rigours of professional commitments leave very little time for Noor to be herself. She has two best friends and a man whom she is in love with.

After playing strong characters in Akira and Force 2, Sonakshi’s fans would be waiting for her to pull off another action-packed performance. Sharing screen space with him is Purab Kohli who plays her love interest Ayan Banerjee. 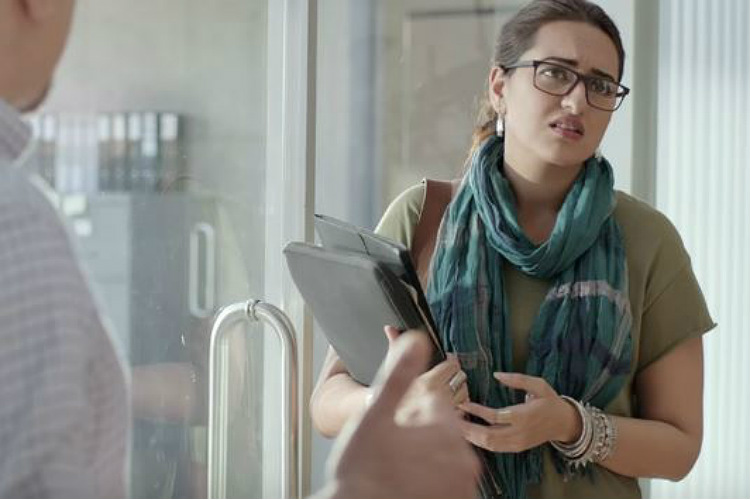 A still from Noor (Courtesy: YouTube/T-Series)

Noor is based on a novel by Pakistani author Saba Imtiaz. Saba’s novel was titled Karachi, You Are Killing Me and chronicled the story of a 20s something journo whose job was show up at bomb sites and pick her way up.
The novel got positive reviews and Saba also wrote the screenplay of Noor. India’s Abundantia Entertainment acquired the Bollywood film adaptation. Noor has been directed by Sunhil Sippy. Filming for Noor began in July 2016 in Mumbai’s RK studio.

Noor’s music manages to tell everything that is right and wrong in the life of the protagonist. The songs have been composed by Amaal Mallik. The lyrics have been penned by Manoj Muntashir and Kumaar. Noor’s difficulties in juggling her personal and professional life is perfectly depicted in Uff Ye Noor.

Gulaabi Aankhen, the popular song of the 70’s, has been recreated in the film. The modified version has been crooned by Amaal Mallik, Tulsi Kumar and Yash Narvekar.

Noor will be releasing in 1500 screens. What may work for the movie is the presence of Sonakshi Sinha and a fresh story line. What may not is the fact that it doesn’t have a Khan or Kumar in it. Noor might earn close to Rs 4 crore on the opening day and the lifetime collection would come to around Rs 25 crore making it an average movie.