Nothing hurts as much as words unspoken. In case of two of India’s most celebrated writers – Amrita Pritam and Sahir Ludhianvi, words were indeed spoken, poems were written and letters exchanged. Yet, what could have become one of the greatest love stories of the 20th century remained incomplete. The unrequited and passionate love between Amrita Pritam and Sahir Ludhianvi is something that might be tapped in Sanjay Leela Bhansali’s next. Reports are rife that the director will soon roll his next based on the life of poet Sahir Ludhianvi, in which Deepika Padukone will play Amrita Pritam.

Pritam and Ludhianvi’s love story has intrigued many, the most important question being- why didn’t they chose to be theirs forever? Maybe the literary stalwarts thought leaving an unfinished love story would be best. Though not much has been revealed about this movie, we thought it would only be best to tell about their love story. 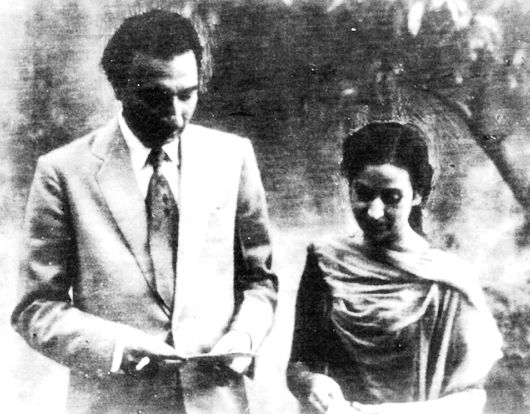 It was in the year 1944, that Amrita and Sahir met for the first time at a mushaira in Preet Nagar, a village between Delhi and Lahore. Words played their part and the two understood their association would not end as the evening came to an end. Amrita was already married to Pritam Singh, but when has love ever understood societal boundaries? From the first meeting, Amrita and Sahir bridged their distance with words. Letters were exchanged between Delhi and Lahore, and Amrita referred to Sahir as “Mera shayar”, “Mera mehboob”, “Mera khuda”.

The partition left a deep impact on both their lives. After a while, Amrita left her husband and Sahir shifted to Mumbai (then Bombay). Amrita chose to write about their story in her works. In her works, ‘Ik Si Anita’ (A Girl Named Anita), ‘Dilli Diyaa Galiyaan’ (The Bylanes of Delhi) and the collection of short stories ‘Aakhari Khat’ (Final Letter), Amrita extensively wrote about her love for Sahir. The 1956 work titled ‘Sunehray’ (Messages), which fetched her a Sahitya Akademi Award, was also written for Sahir. The exchange of letters did not stop and they met on few occasions. Their meetings had more silence than words.

ALSO READ: Why are we obsessed with Deepika Padukone’s Padmavati fee?

Despite all this, Sahir seemed unwilling to commit to Amrita. Once Amrita wrote a short story for the magazine Aayeena, hoping to get a response from Sahir – who by then was at the peak of his career. Sadly, that didn’t happen. Years later, Sahir told Amrita he wanted to show the work to his friends but couldn’t because he thought they would make fun of him. As communication withered away, distance kept on increasing. Some say Sahir’s infatuation for Sudha Malhotra led to the end of their relationship.

In the 1950s, Sahir and Sudha’s affair attracted good sensationalism. In her works, Amrita wrote,

I was about to pick up the phone and call Sahir, when I saw the latest issue of Blitz. It had Sahir’s picture and a story that said he was with another woman. My hands froze…

The loneliness which Sahir’s absence created, Amrita filled with a painter Imroz. She heaped praises on him for accepting her the way she was. But on the other end of the table, Sahir wasn’t coping well. His 1964 work for the movie Dooj Ka Chand was said to be inspired by his heartbreak.

ALSO READ: ‘Nothing and no one can stop this film’: Deepika Padukone on Padmavati

Amrita and Sahir’s bond was an overflow of passion. Once the doyenne of Punjabi literature had said she used to keep smoked cigarettes of Sahir in a cupboard and used to light them when she felt alone. Sahir did the same with a cup in which Amrita drank tea. When his friend Jaidev told him about how dirty the cup was, Sahir said,

Don’t you dare touch it. Amrita drank tea out of it the last time she was here.

Their love story may have not reached the end it deserved, but it will always be remembered till the end of time.