The Surat Police on Thursday, October 19, arrested five men for destroying a rangoli inspired by Deepika Padukone’s look in Padmavati. The incident came to light when artist Karan K mentioned that the rangoli which took him 48 hours to make was destroyed by the goons in seconds in a tweet. A video of the incident which captured the goons shouting Jai Shri Ram as they vandalised the artwork in Rahul Raj Mall area on October 15 went viral.

Out of the five people arrested, four belong to Rajput outfit Karni Sena and one to Vishwa Hindu Parishad. Confirming the arrests, Commissioner of Police, Surat, Satish Sharma told an agency:

We have arrested five persons, four of them belonging to outfit Karni Sena and one from the VHP. More persons are likely to be arrested as the video footage recovered by us shows 8-10 persons involved in the activity. 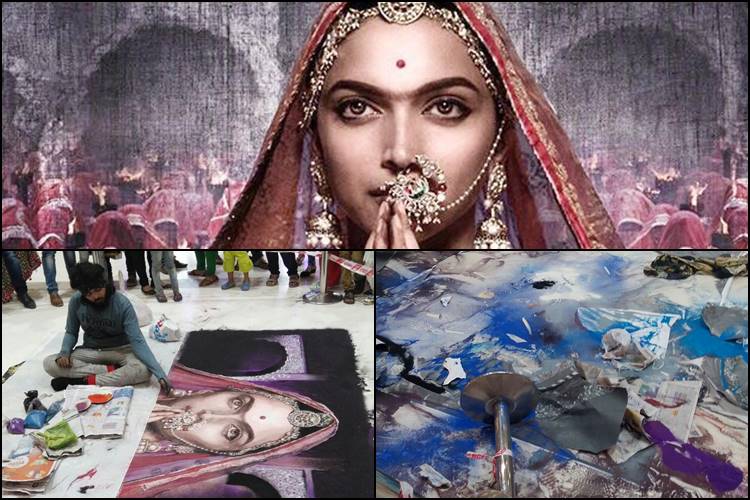 After the artist took to Twitter to explain what happened with him, Deepika Padukone too expressed her anger. She called the behaviour unacceptable and also asked I&B minister Smriti Irani to take action. Here are her tweets:

Who are these people?Who is responsible for their actions?For how long are we going to let this go on? pic.twitter.com/2WFN0jcdua

this has to stop NOW & action must be taken! @smritiirani pic.twitter.com/o5RGhDTHPJ

Also read: ‘Wait and watch’, says Shahid Kapoor on reviews he got after Padmavati trailer release

Rajput outfit Karni Sena’s disapproval with Sanjay Leela Bhansali directorial started when the team went to Rajasthan for filming. During the shooting, members of this fringe group vandalised the sets and manhandled the director. They claimed that the movie distorted history and showed their beloved queen Rani Padmini in a romantic sequence with Alauddin Khilji (played by Ranveer Singh). This was clarified by Bhansali’s team several times, Karni Sena members refused to believe it.

With the authorities’ intervention, the movie may now witness a smooth release on December 1.