I was watching Kathryn Bigelow’s Detroit only a few days back. The film takes place right in the midst of the infamous 12th Street riots, when black men were rounded up in jails by (mostly) white police officers… for partying too late. This was close to the simmering point of the African-American civil rights movement, and a question repeatedly presented itself as I watched Black Panther. What if I told these men from 1967, who were harassed by their own law enforcement and bullied by their own constitution, that there would come a day when Hollywood would produce, promote and release a superhero film with an all-black cast? A film that ‘allowed’ them to celebrate their African roots, a fictitious country from Africa would provide aid and assistance to the world, and a few black individuals would be shown driving posh cars and pulling off fancy stunts to save the world. Yes, including the white folk. They would, in all probability, ask me what I was smoking.

For a desi equivalent – imagine a Muslim social film where the protagonist talks about saving the world whilst offering his/her take on a secular India? Or think about the number of times a Hindi film has been led by Dalit characters, while discussing caste. This is not a drill anymore, mainstream Hollywood has (phew!) set a precedent for inclusive filmmaking. 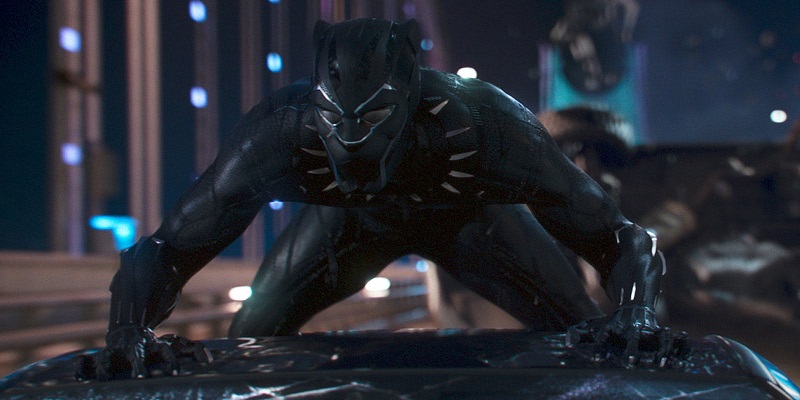 No more excuses for whitewashing a film in the name of ‘viability’.

Black Panther is not just a film. It’s a slap on the face of Hollywood’s age-old theory, that films starring the ‘marginalised communities and races can’t make cash at the box office’. It wallops the ancient wisdom, that feels the need to cast white men in the roles of Asians, Indians…hell even necessitates changing the ethnicity of an African-American protagonist, to make a film more ‘viable’. Well too bad, Ryan Coogler’s film is here and no more excuses will be entertained. The film comprising an all-black cast, has Chadwick Boseman clawing his way on top of invisible cars, scampering on the ledge of skyscrapers and yanking out wheels of speeding cars. Why? Because he’s the Black Panther… and the world needs saving.

Why did the MCU pick Ryan Coogler, who had only two films behind him?

The hero from Wakanda made his first appearance in 2016’s Captain America: Civil War. After testing positively with the audience, a standalone film was announced. The Marvel Cinematic Universe (MCU) made a brave choice by zeroing in on a director, who had only two films behind him. Coogler made the hard-hitting Fruitvale Station in 2013, where he chronicled the last day in the life of a man who would be fatally shot by the police at a train station. His second film was a spin-off from the popular Rocky franchise, where he relocated the ‘iconic sprint’ to the black neighbourhood of Philadelphia amongst wheelies and drifting quad bikes.

This ability to doff his hat to the franchise tradition, and still keep his own voice in the film won the director a bucketful of acclaim and appreciation. A quality he powerfully exhibits in Black Panther too, where he keeps the Marvel charm running through the irreverent one-liners and still finds a story embedded deep in the rich soil of Africa.

And boy, does it depict the Afro heritage in all its glory. Utopian fantasies and films with black actors, have rarely gone hand in hand. Before Black Panther, the general stereotype for mainstream Hollywood movies showcasing an African nation has always been that of one torn with civil war, battling rebel armies and savagery over a handful of resources. Set in a fictitious country, this movie not only provided the makers with the opportunity to build Wakanda from the ground up, but it also allowed them to omit the white saviour from the narrative.

And as it subverts the standard racial tropes of a ‘mainstream Hollywood film’, it doesn’t miss the opportunity to turn the tables on gender roles too. There are no distressed damsels in Wakanda. The women comprise – army generals, the elite warrior squad, the King’s advisory, secret spies and also the brains behind the country’s advanced tech. It is, in fact, the men, who lay down their weapons in front of the women after coming to terms with their misguided notions. 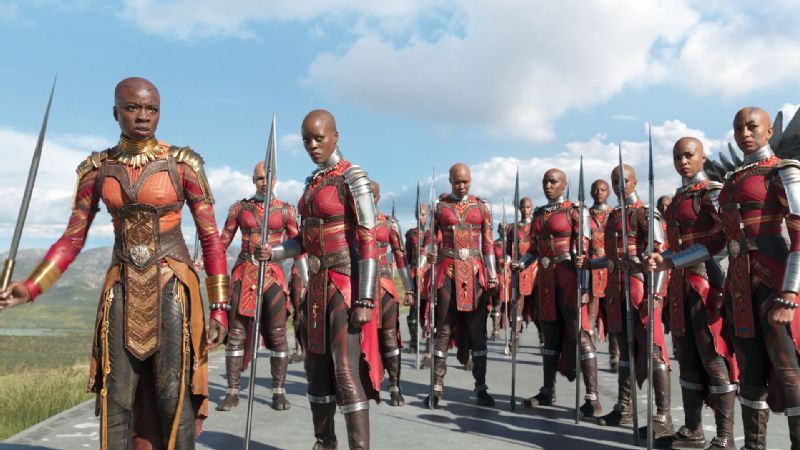 Black Panther is the African-American James Bond/Jason Bourne/Batman that never made it.

Coogler probably recognised this as his one, rare opportunity to hoard in as many movie references for his all-black cast. So when King T’Challa is shown trying fancy armour built by his sister (Wakanda’s tech wiz), one can’t help but be reminded of James Bond and his rendezvous with the Quartermaster. An action set-piece takes place inside a casino, which might trigger memories of Casino Royale and Skyfall for some. The high-octane chase sequences on the streets of Busan, and the hand-to-hand combat sequences remind you of the antics of Ethan Hunt and Jason Bourne. The protagonist falters and rises from the abyss, reminiscent of Christopher Nolan’s The Dark Knight Rises. Here instead of rising from a pit, T’Challa emerges through the flames like a phoenix. On two separate occasions, Michael B Jordon’s Erik Killmonger and Andy Serkis’s Ulysses Klaue engineer an escape with the help of signature masks, heavy artillery, explosions and getaway vans. Both these scenes are a definite tribute to Michael Mann films, especially 1995’s Heat.

Curiously, ALL of these references originate from films where white men play the principal characters.

No worthy adversary quite like a brother in the MCU.

As any tent-pole franchise in a post-The Dark Knight era will tell you, a film is only as strong as its antagonist. And Black Panther proves yet again, there’s no villain quite like a brother in the MCU (after Loki). Erik Killmonger is the result of Michael B Jordon’s third consecutive collaboration with director Coogler, and it’s no wonder he gets the best part. Having spent a majority of his life without a father, Killmonger is the version of T’Challa raised minus the justice and fairness of Wakanda.

Growing up in the streets of Oakland, California – he’s experienced the world as a black American man. And that makes him resent his cousin and ancestral home even more – for being silent spectators in spite of all their expertise and prosperity. Killmonger is an interesting antagonist because his arguments are righteous and nearly convincing. Something T’Challa recognises when his estranged cousin shows up to ‘challenge’ the throne. He understands Killmonger’s rage, and that’s what makes their chemistry more potent. 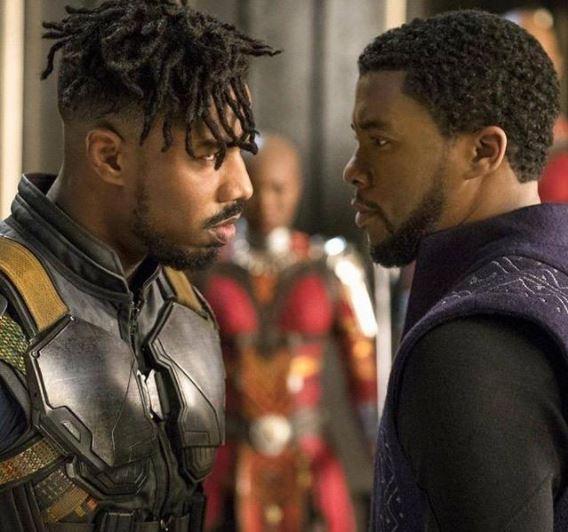 Anyone else relieved that the climax moved out of New York/Chicago/California?

Even as Black Panther overdrives into the CGI-heavy climax that we’ve come to expect from a Marvel superhero movie, I was hardly irked by it. The kind of themes it establishes from the start, the film delivers a spectacle unlike we’ve ever seen on the big screen. If you thought seeing a purple sky looming over a son seeking the wisdom from his father’s spirit was a scene straight out of The Lion King, wait till you see it here. It is a film that manages to weave a fable, a commentary on contemporary racial politics and a satisfying ‘Hollywood blockbuster’ – all into one. If you, like me, are bored of the superhero movies taking place in New York, Chicago and California, the vast lands of Wakanda will be a treat to the eyes.

Black Panther is a rollicking ride and yet, it is not merely a film. It is a war-cry from Hollywood’s African-American folk on behalf of their brothers and sisters from around the world. As the lyrics of the Vince Staples song used in the film’s trailer suggest – “show me my respect and bow down”. They couldn’t be more explicit. Wakanda forever!