Matt Damon has been on the receiving end of social media trolling, since the Weinstein story broke in October. Both Damon and Ben Affleck, who became famous with Goodwill Hunting (produced by Weinstein’s Miramax), were questioned about how they didn’t know about the producer’s predatory behaviour and whether they were shielding him.

Appearing on the show Popcorn with Peter Travers, Damon was once again questioned about Hollywood’s open can of worms, and his response was as dense as you’d expect it to be.

The Jason Bourne actor, who has maintained a carefully curated reputation of one of the most ‘woke’ actors in Hollywood, went to great lengths to explain that while women feeling empowered to outrage over inappropriate behaviour was a watershed moment, we had to abstain from becoming a part of a ‘culture of outrage’. Because that was the issue, right? The outrage, not what caused it.

“There’s a difference between, you know, patting someone on the butt and rape or child molestation, right? Both of those behaviors need to be confronted and eradicated without question, but they shouldn’t be conflated, right?” the actor was quoted as saying.

Hollywood actor Alyssa Milano, who started #MeToo earlier this year, didn’t take the leading man’s comments very kindly. As she went on to explain that we are in a ‘culture of outrage’ because the ‘magnitude of outrage is outrageous’. 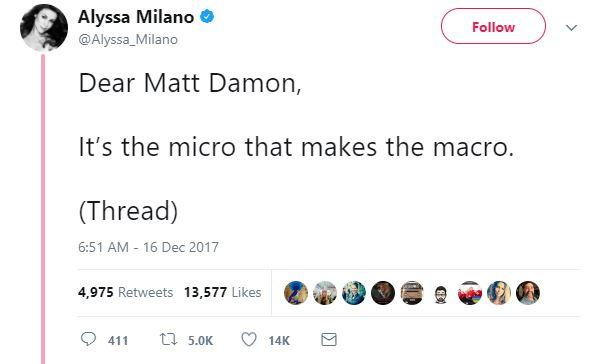 She schooled him about the fact that even though ‘grabbing someone’s butt’ and ‘rape’ were on different ends of the spectrum, they were a part of the same systemic disease. 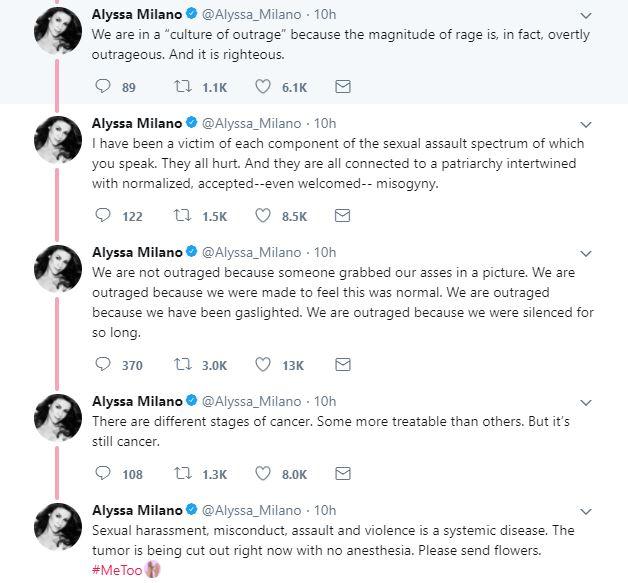 Inappropriate behaviour in any form should be equally abhorred. Is Mr. Damon listening?