We Indians like to ham it up. That’s no big secret. And obviously, because Bollywood is all about amplification (Yash Chopra made us believe that Switzerland was Shimla for decades), we have had slabs of ham passing off for actors for decades. Remember a certain Shatrughan Sinha?

But what happens when normally reined in actors decide to ham it up.

Yes, it’s a cringe-fest unlike any other.

ALSO READ: These 8 Bollywood choreographers from the 1990s damaged you for life

Here are 14 perfectly decent actors (not counting Amisha Patel), who had to dial up the hamming in some of their films and ended up being members of the hallowed club of cringe Bollywood.

1. Ashok Kumar in Clerk
Manoj Kumar’s iconic film had the most bizarre scene where Ashok Kumar’s heart attack is cured with patriotism.

2. Rekha in Madam X
Whoever signed off on Rekha’s costume was the same person who wrote her dialogues. Bizarre clothes for mob boss, and even bizarre dialogues coming out of her mouth.

3. Karishma Kapoor in Dil Toh Pagal Hai
It’s a Yash Chopra movie, and I understand how she had to distinguish herself from the pavitra Pooja…but what was that voice? Sorry no no…Karishma.

4. Hrithik Roshan/Kareena Kapoor in Main Prem Ki Deewani Hoon
Correctly coined as the performance with the most ‘acting per square inch’ by standup comedians Kanan Gill and Biswa Kalyan Rath, Hrithik and Kareena in this movie are bubbling with so much energy that they could put a crazy ball to shame.

5. Amisha Patel in Aap Mujhe Achhe Lagne Lage
The human form of asthma emerged in one of Amisha Patel’s most distiguishable performances in Vikram Bhatt’s film. She cries SO HARD, that torrential rains in Meghalaya felt inferior after watching her.

6. Akshay Kumar in Waqt: Race Against Time
Bollywood actors just can’t seem to cry in a ‘commercial film’ without hamming. Akshay Kumar (who is perfectly okay in the rest of the film) cuts loose from logic and laughably breaks down in the end.

7. Kajol in K3G
She knows how to cry, sure. But the way Johar shamelessly peddled jingoism showing her run in slow-motion with a remixed version of Vande Mataram playing, was just TOO MUCH. Even by Dharma standards.

8. Shah Rukh Khan in Billu
Meant to be a special appearance in the film, SRK hijacked this adaptation of Krishna-Sudama with his deplorable performance. And that too after nearly 2 hours of silently-dignified performance by Irrfan.

9. Rani Mukherji in Ghulam
Not completely her fault, but her voice was dubbed and this was her first A-list movie. And hence, her screechy voice when she screams at Aamir Khan’s character is face palm. 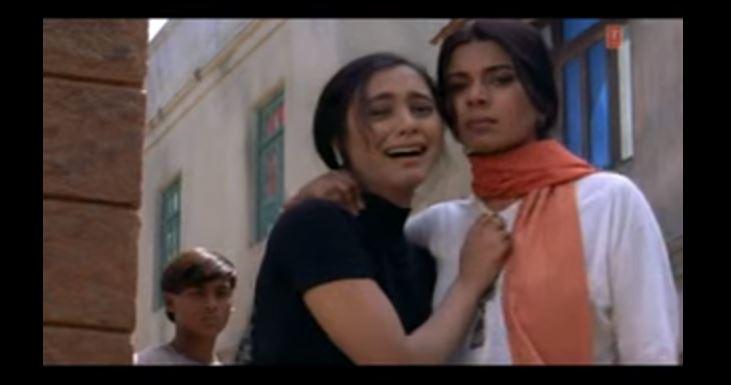 10. Raaj Kumar in Bulandi
Long before Siri and Fardeen Khan, was Raaj Kumar. No doubt he had a style of his own, but there were some roles where he just sleep-walked through. And hoped his charisma to do the work. Unfortunately, it didn’t.

11. Kirron Kher in Devdas
She’s played the intentionally, hammy Punjabi mom in so many movies that I’ve lost count. But remember that time when she pretended to be a high-pitched, Bengali Maa in Devdas, have a look.

13. Aamir Khan in Tum Mere Ho
Aamir Khan might have earned the reputation of the ‘thinking actor’ of Bollywood, but there are skeletons in the closet. And his role as a snake charmer was appallingly hammy.

14. Dilip Kumar in Izzatdar
Widely considered Bollywood’s finest actor, Dilip sahab too couldn’t do without hamming in this scene opposite an eager-to-prove Govinda. The melodrama is all cylinders blazing in this scene.