1) Oppam marked the 40th collaboration of Mohanlal – Priyadarshan duo, out of which most of them have been blockbusters at the Box Office. Recently, Priyadarshan had revealed that Mohanlal wanted him to direct 50 films with him.

2) Oppam was Mohanlal’s first Malayalam release of 2016. The actor’s previous releases of the year were Telugu films, Manamantha and Janatha Garage. The latter turned out to be the highest Telugu grosser of the year.

3) Oppam is the third highest grosser of Malayalam film history. The film has so far minted Rs. 43 crore at the Kerala Box Office and is still running to packed houses in limited screens across Kerala. It is also expected to break the lifetime collections of Mohanlal’s 2013 blockbuster, Drishyam, which had minted Rs. 44.75 crore at the Box office.

4) Oppam is the fifth Malayalam film to cross the Rs. 40 crore mark at the Kerala Box Office after Drishyam, Premam, Ennu Ninte Moideen, and Pulimurugan. Interestingly, With Pulimurugan, Drishyam, and Oppam, Mohanlal is now the only Indian actor to have top three industry hits.

5) Just like Oppam, his other 2016 releases, Pulimurugan and Janatha Garage turned out to be all-time blockbusters at the Box Office and with this remarkable feat, the four-time-National award winner has emerged as the first Indian actor to do the same within a span of 60-calendar days.

6) Oppam also marked producer Antony Perumbavoor second cameo in Malayalam films after Drishyam. Interestingly, the hit maker’s all three cameos in films including Pulimurugan turned out to be top three grosser of Mollywood.

7) While Bollywood films are struggling to complete 50-theatrical days at Mumbai Box Office, Oppam had a terrific 12-week-theatrical run in Mumbai. The film, which had released with English subtitles in non-Kerala states was a super hit at Mumbai, Chennai and Telugu Box Office as well.

8) Due to the huge public demand from the Telugu audience, the Telugu dubbed version of Oppam is slated to be released in Andhra Pradesh and Nizam circuits soon. The film, titled Kanupapa will hit the screens on 30 December 2016.

9) Upon its release, Oppam had faced stiff competition from other Onam releases including Prithviraj’s Oozham, Dileep’s Welcome To Central Jail, Vikram’s Iru Mugan, Kunchako Boban’s Kochavva Paulo Ayyappa Coelho and Jude Antony’s Oru Muthassi Gadha. But the Priyadarshan starrer has shattered the opening week collections of Premam to become the top Malayalam film with the highest opening week. However, Premam basked in its glory only till Pulimurugan released. Oppam has broken the worldwide collections of Premam as well. 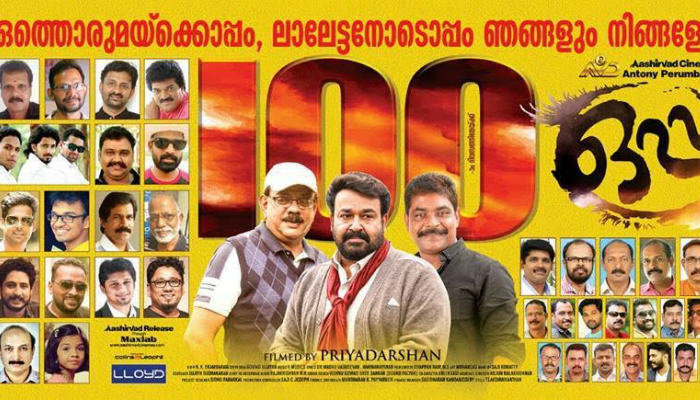 10) Oppam also marks the debut of four music composers, Jim Jacob, Biby, Eldhose and Justine of the music band, 4 Musics. The songs from the album, Chinnamma Adi, and Minungum Minnaminunge turned out to be top two chartbusters of 2016. The film also marked the Malayalam debut of Bollywood actress Devshi Khanduri.