Priyanka Gandhi -Vadra on February 17 begins the campaign for the Congress and SP alliance for the assembly elections in Uttar Pradesh. She is campaigning for the third phase from Rae Bareli which is Sonia Gandhi’s constituency and is accompanied by her brother and Congress Vice-President, Rahul Gandhi. Earlier,  Congress leader told IANS, right now she will be campaigning for the 10 party candidates in the two parliamentary constituencies and at a later stage can also campaign for joint candidates of the alliance.

Earlier, Rahul Gandhi addressed a rally in Raebareli where he attacked Prime Minister Narendra Modi, saying that he works only for rich.

5: 08 PM: PM Modi is an outsider and UP does not any outsider for its development.

5: 04 PM: Youth of UP can join politics and can develop the state, says Priyanka Gandhi Vadra

Here are the highlights from Rahul Gandhi’s speech 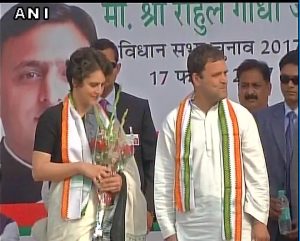 As per the campaigning list that was released by Congress, Priyanka Gandhi is one of the star campaigners.For past several years, Raebareli has been Sonia Gandhi’s constituency but as she is not keeping well for sometime, it was expected that Priyanka might step in for campaigning in order to retain the crucial congress seat. Priyanka also played a major role in Samajwadi Party-Congress alliance for the upcoming elections in Uttar Pradesh. Amethi will go to polls on February 27, while Rae Bareli votes on February 23.