Voting in 73 constituencies of the politically crucial Uttar Pradesh took place on February 11 and a total voter turnout of 63 per cent was recorded till the end.

The fate of 839 candidates who are in the fray for 73 assembly seats has been sealed. Barring a few incidents of violence, the polling was more or less peaceful. Supporters of Bahujan Samaj Party and Samajwadi Party clashed in Kathuar area of UP’s Meerut city, one person was injured in a firing.

The results of assembly elections will also be considered as people’s verdict on Prime Minister Narendra Modi’s demonetisation drive.

It was likely to be a four-cornered contest as main protagonists SP-Congress combine, BJP, BSP and RLD are expecting a strong show in the western part of the state which has seen a spate of communal violence in the past.

A total of 839 candidates were in the fray. Elaborated security arrangements were made in communally sensitive Muzaffarnagar, Shamli, Dadri and other areas. 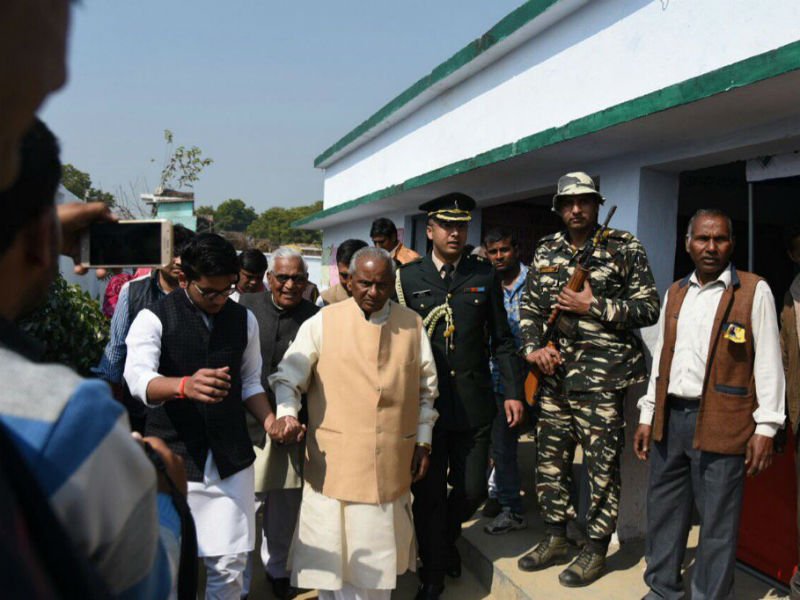 2:00 pm: It was a strategic decision of both the SP-Congress combine and PM Narendra Modi to hold press conference and rally in other areas of the state. It is also seen as a last-ditch attempt to shape-up the mind of the voters in the polling areas.

1: 35 pm: When I took strong steps against corruption, all parties came together against Modi. SP, BSP united and spoke in one voice against us: PM Modi

1:30 pm: Voting slow in several booths in Mathura. Polling officials say footfall may increase later in the day. If it doesn’t then the guessing game over results begins all over again.

Our Govt is dedicated to serve the poor, marginalized & farmers; We are initiating several steps to uplift them: PM Modi pic.twitter.com/MloNwcadZ0

Had heard about Budaun even when I was in Gujarat;What is the reason that fruits of development could not reach this land under SP, BSP?: PM pic.twitter.com/vL1uB7vxqd

12:20 pm: As per initial reports, we are leading in this 1st phase: Union Minister Prakash Javadekar

11:50 am: Here is a big BSP wave across the state and the reports I am getting from the first phase of voting are very positive:Mayawati

11: 42 am: BJP has not fulfilled one -fourth of its promise: Mayawati

BJP has been in power in Centre for more than 2 1/2 years and they have not fulfilled even 1/4th of their 2014 promises: Mayawati pic.twitter.com/tfRJTOBlj4

11:40 am: BSP supremo Mayawati says only her party can give ideal government.

Only BSP can provide an ideal Govt in UP. Cong-SP and BJP are trying to misguide people but now people know their real face:Mayawati pic.twitter.com/u0PW6RXTmg

11:00 am: BJP wins all three MLC seats in UP where elections were held: Kanpur, Gorakhpur and Bareilly. The three seats won by BJP are graduate MLC seats.

10: 55 am: PM’s strategy is distraction;When he can’t answer questions, then he starts distracting;Truth is that in 2.5yrs, he has failed: Rahul Gandhi

10: 53 am: Coordination is there in this alliance; Reality is that we’re solidly fighting together for 99% of seats: Rahul Gandhi

10: 50 am: Rahul questions the contribution of Prime Minister Narendra Modi for Uttar Pradesh in his two and half years rule.

10: 45 am: Akhilesh Yadav announced Rs 1,000 pension for 1 Cr poor families, Food for Rs 10, Electricity, drinking water and roads in 5 years in every village, free cycle to girl students from class 9 to 12 standard and for promising boy student.

10:35 am: Getting angry is not a good thing, it only proves that the person is feeling the ground sleeping under his feet, says UP CM.

10: 30 am: Taking a swipe at PM Narendra Modi, Uttar Pradesh Chief Minister said that our Prime Minister likes to search on google and peep in other’s bathroom.

10:00 am: Police has detained Gagan Som, brother of BJP candidate Sangeet Som for carrying a pistol inside poll booth.

9:20 am:  Today’s poll will be an acid test for Pankaj Singh, the BJP candidate and son of Home Minister Rajnath Singh, who has faced rebellion from a section of the party. However, his chances remain strong as he has the support of Noida MP Mahesh Sharma.

#UPPolls2017: Senior citizen and divyang voters being felicitated at a polling booth in Loni, Ghaziabad. pic.twitter.com/Xsdqaubeb5

8:45 am: Ghaziabad’s Sahibabad is the largest constituency in terms of electorate

8: 37 am: People after casting their votes in Bulandshahr

8:35 am: Voters flaunt inked fingers for camerpersons outside polling booths.

8:15 am: According to the Election Commission, Etah’s Jalesar is the smallest constituency in terms of electorate.

8:00 am: PM Modi urges people to participate in the festival of democracy

7:30 am: High security in place to ensure smooth polling. Voting began on Saturday for the first phase of Uttar Pradesh Assembly elections