Polling has ended for the sixth phase of Assembly elections in Uttar Pradesh on March 4. A total of 49 seats from Maharajganj, Kushinagar, Gorakhpur, Deoria, Azamgarh, Mau and Ballia districts have gone to polls. The penultimate phase saw some bitter poll campaigning with political parties going all out against rivals in their bid to woo voters.  With seats in BJP MP Yogi Adityanath’s Gorakhpur constituency also in fray, the saffron party would look to consolidate its Hindu votes in the region. BSP is expecting a turnaround of Muslim-Dalit votes which it seemed to have lost in Lok Sabha elections 2014. SP-Congress alliance would like to hold its sway in the region and repeat its performance of 2012 assembly elections. A total of 635 candidates are in fray and nearly 1.72 crore, including 94.60 lakh men and 77.84 lakh women, are eligible to cast their votes.

In the sixth phase of assembly elections, 57.3 per cent of voter turnout was recorded.

5:54 pm: Polling ended for the sixth phase of elections of UP elections

#UPPolls2017: Polling ended for sixth phase of elections of UP elections. Visuals from a polling booth in Gorakhpur, UP. pic.twitter.com/9RyIZkcxRI

1:00 pm: 30 and 27 per cent voting has been reported in districts of Kushinagar and Mau districts respectively. The news was confirmed by an Election Commission official who revealed till 11 a.m., 25 per cent voting was reported from Ballia, 23 per cent from Maharajganj and Deoria, and 22 per cent from Gorakhpur. Azamgarh, the Lok Sabha constituency of Samajwadi Party patron Mulayam Singh Yadav recorded the lowest turnout of 21 per cent.

12:45 am:  Massive show of strength by prime minister Narendra Modi in neighbouring Varanasi. He will later address a rally in the city as well

12:15 am Home Minister Rajnath Singh on UP elections

23.28% voting recorded till 11 am in the sixth phase of UP elections 2017. pic.twitter.com/pdVINTqgxr 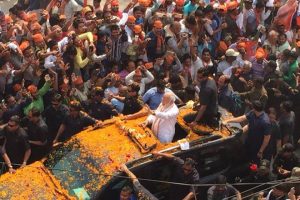 11:15 am: They (SP-Cong) should have at least said in public that it was mistake to give ticket to Gayatri Prajapati and that we won’t support him- Union Minister Venkaiah Naidu

11:00 am: According to reports, 13 per cent of voter turnout was seen in the state till 10 am. “The polling was about 13 percent till 10 am. It’s going on peacefully,” office of UP Chief Electoral Officer was quoted by Zee News.

10:30 am: PM Modi works for entire nation, every youth of UP sees that and wants that sort of commitment for them as well: Rajyavardhan Rathore

10:05 am: PM Modi reaches Babatpur airport, to hold rallies in Varanasi and Jaunpur

10:00 am: Union minister Rajyavardhan Singh Rathore confident of 2/3rd majority in UP elections

Other parties have been in UP for far to long but haven’t been able to bring change. Last 2phases gonna takes us to 2/3rd majority-R Rathore pic.twitter.com/pMGWCzxKZb

9: 25 am: PM Modi will be addressing rallies in his Lok Sabha constituency Varanasi and Jaunpur today for the final phase of assembly elections. However, since the voting is underway in east UP, political leaders often make indirect references to woo voters on polling day. Addressing a rally in Mirzapur district on Friday, PM Modi said SP, Congress and BSP will get shocks after the result of the elections will be declared on March 11.

9: 10 am: Voting affected due to snag in EVM machine at booth no. 273 at Nasirpur village in Mau district.

#UttarPradeshpolls: Voters queue up at polling booth no.3705 in Gorakhpur as sixth phase is underway. pic.twitter.com/mZclaBMXPb

8: 15 am A young voter in Gorakhpur expresses disappointment after she could not find her name in voter list

Have not been able to cast my vote till now, my name is missing from the voters list: Voter at booth no.3705 in Gorakhpur #UttarPradeshpolls pic.twitter.com/KTWe4HNt8Z

8:00 am PM Narendra Modi appeals to voters to participate in the festival of democracy

Special efforts made for differently abled voters, they are being assisted by helpers & wheelchairs:Nikhil C Shukla, Mau District Magistrate pic.twitter.com/DwLowsHMln

#UttarPradeshpolls: Voting on 49 seats across 7 districts in sixth phase underway, visuals from Mau booth no. 280 pic.twitter.com/5O2Sb764QB

#UttarPradeshPolls: Yogi Adityanath casts his vote at booth no. 3705 in Gorakhpur pic.twitter.com/2CWIrxbqAV

Special security arrangements have been made to ensure peaceful polling in all seven districts. Central Para Military Forces have already reached the constituencies and carried out flag march in sensitive areas.