After a high voltage polling, the D-day is finally here! The fate of 1,145 candidates has been revealed after the Punjab Election results 2017 were declared today. The counting of votes for the crucial state of Punjab began at 8 AM. Congress has managed to register a historic win in the state. While Shiromani Akali Dal led by Parkash Singh Badal was facing flak over the growing drug menace in the state, Arvind Kejriwal’s Aam Aadmi Party (AAP) who made its debut in the state, was in a commanding position as per the exit polls.

Various exit polls conducted by the media houses, had claimed that the Arvind Kejriwal’s Aam Aadmi Party will beat  Bharatiya Janata Party (BJP)-Shiromani Akali Dal (SAD) coalition, which had ruled the state for a decade. However, the exit polls did not turn out to be as accurate.  As per the exit polls, AAP was set to win 59 to 67 of the 117 assembly seats. But instead,  Congress is headed towards a historic win while AAP is set to be the main opposition party.

Here are the updates:

4: 25 PM: Prime Minister Narendra Modi thanks the people of Punjab to give SAD and BJP the opportunity to serve them for over 10 years.

I thank people of Punjab for giving @Akali_Dal_ & @BJP4Punjab the opportunity to serve for 10 years & for the support we got in these polls.

3: 30 PM:  Parkash Singh wins his home turf Lambi. However, he is all set to tender his resignation to the governor.

2:08 PM: Going by the EC trends, looks like Aam Aadmi Party is all set to be on the second spot and will be the main opposition party.

2: 00 PM:  AAP’s H.S Phoollka wins from Dakha constituency. Thanks people for showering love and bestowing faith in him. Meanwhile, as per the current EC trends, AAP has won 12 seats and is leading in 9.

1:45 PM: Delhi Chief Minister Arvind Kejriwal who was extremely confident of winning Punjab elections have responded to the defeat saying that he respects the decision taken by the people of the state and that they will continue to fight for the development of Punjab.

1: 35 PM: Current Chief Minister of Punjab Parkash Singh Badal has asserted that he will tender his resignation to the governor tomorrow.

Tomorrow I will submit my resignation to the Governor: Parkash Singh Badal #ElectionResults #Punjab pic.twitter.com/XWt5OQUOnp

1: 13 PM: Punjab Chief Minister Parkash Singh Badal who’s party is facing defeat has said that they will hold a committee meeting to analysis the party’s performance in the elections.

We will discuss the reasons in the core committee meeting & analyse each aspect of our performance in the elections: Prakash Singh Badal pic.twitter.com/jnSI6VEvn1

12: 58 PM: Navjot Singh Sidhu who joined Congress recently,  is leading in Amritsar East constituency with a margin of 36314  votes. BJP’s Rajesh Kumar Honey is trailing behind. 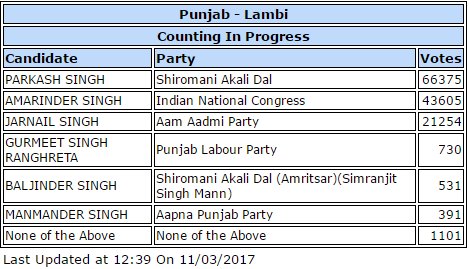 12: 47 PM: Congress spokesperson Rajdeep Surjewala takes a dig at Prime Minister Narendra Modi says, his defeat in Punjab and Goa raises a question about his leadership in the state.

12: 41 PM: According to the latest figures released by the Election Commission, Congress is leading in 67 seats followed by 20 seats.

Captain Amrinder Singh has won from Patiala urban seat by a margin of over 51000 votes #ElectionResults pic.twitter.com/1xUCqy9nuk

12: 10 PM: Hailing Congress’ lead with a  massive majority in the state, Navjot Singh Sidhu asserted that people had only crushed the opposition’s arrogance by voting for the Congress. He further said that it was Congress’ revival.

This is the revival of the Congress, it is just the beginning. Congress will spread from here: Navjot Singh Sidhu,Congress #ElectionResults pic.twitter.com/hvAf2NWBIQ

11: 37 AM: Looks like cricketer turned politician Navjot Singh Sidhu’s decision to leave BJP and join Congress was a favorable one. Sidhu is leading in Amritsar by 6,000 votes.

11: 15 AM: Arvind Kejriwal’s reaction after watching the results

11: 10 AM: Looks like Capt Amarinder Singh who turns 75 today has got his perfect birthday gift win Congress leading with such a huge majority.

11:02 AM: Congress which out of power in the state is all set to make a comeback with a massive majority. At the moment, SAD and AAP are in a tight race for that second spot. Even though SAD is losing, Sukhbir Singh Badal is leading in Jalalabad.

10: 51 AM: Congress all set to take over Punjab while AAP as opposed to what exit polls predicted failed to impress in the state. Now, AAP and SAD are fighting for that second spot.

10: 30 AM: Here’s how the Twitter is reacting to Congress’ lead in Punjab

Hopefully this result will put to end the theatrics of AAP @ArvindKejriwal and focus on governance in Delhi. #PunjabElection2017

Thank you God for saving #Punjab. Why were you on leave during #Delhi elections? #aap #PunjabElection2017

10: 10 AM: Congress leading in 65 seats, Aam Aadmi Party leading in 25, SAD is trailing behind with 23 seats. Meanwhile, BJP is leading only in 4 seats. Congress workers are celebrating their lead in Chandigarh.

9: 49 AM: As per the official Election Commission update here’s the latest statistics 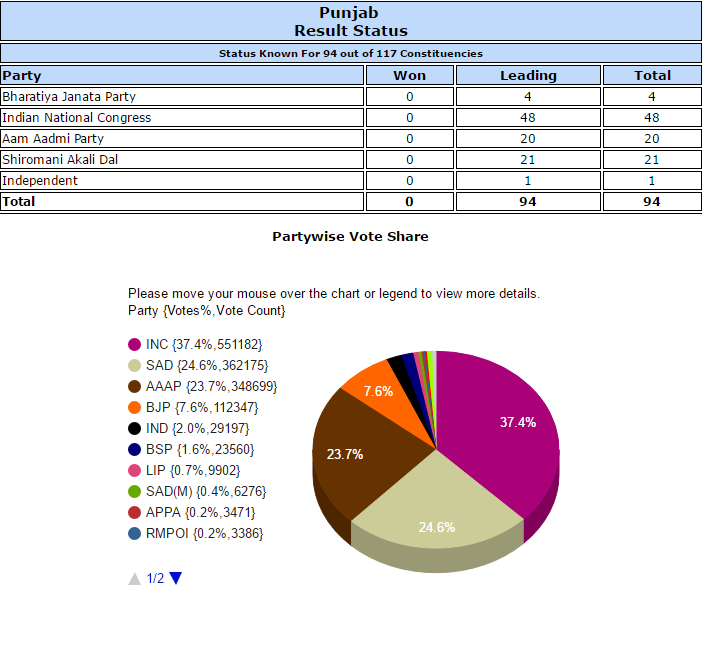 9: 45 AM: Punjab Cabinet Minister Bikram Singh Majithia is leading in Majitha seat by a margin of 1,126 votes over his rival Congress. Also, AAP’s Gurpreet Singh Ghughi leading from Batala.

9: 22 AM: BJP has managed to open its account and is now leading in 1 seat. Meanwhile, Congress has taken a massive lead and is leading in 47 seats. AAP is trailing with 18 seats, while SAD is leading in 11 seats.

9: 13 AM: BJP leader Manoranjan Kalia trailing by 5000 votes from Jalandhar Central. While Congress is racing ahead by leading in 34 seats. AAP is leading in 13 and SAD is on 7.

8: 58 AM: Latest trends suggest AAP’s Bhagwant Mann is now leading in Jalalabad while Deputy CM Sukhbir Singh Badal is trailing. Sukhbir was leading sometime back. While Punjab Chief Minister is still leading in Lambi where Capt Amarinder Singh has challenged him at his home turf. 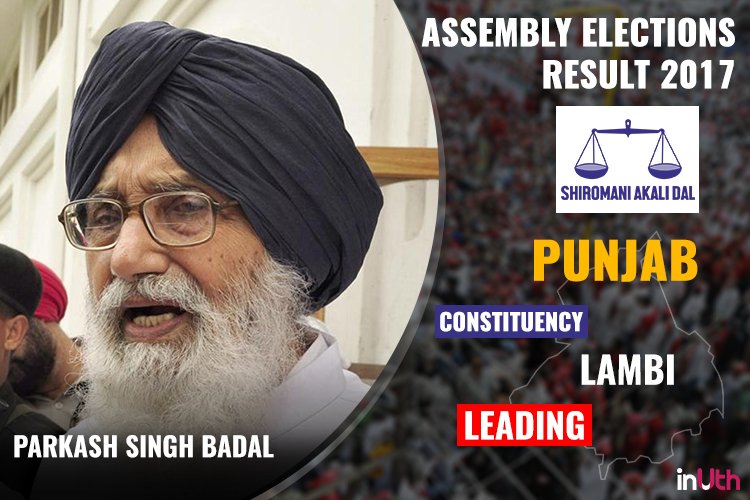 8: 53 AM: Congress leading in 20 seats, Arvind Kejriwal’s Aam Aadmi Party leading in 7 seats while SAD is lacking behind. Will SAD-BJP be able to catch up? Stay tuned to witness the nail-bitting election results.

8: 45 AM: Sukhbil Singh Badal, deputy chief minister of Punjab, is trailing in Jalalabad.

8: 35 AM: First leads for Punjab are out. Parkash Singh Badal leading from Lambi. Which means, BJP-SAD is leading by one seat. It must be noted that Lambi is a very crucial as it is the first time that political veterans, Parkash Singh Badal and Capt Amarinder Singh are locking horns in Bada’s traditional seat.

8: 30 AM: Drugs, unemployment are some of the main issues in the state of Punjab. Most of the parties have vowed to deal with the issues including corruption. Arvind Kejriwal did not leave a single opportunity to attack BJP-SAD coalition andad urged the voters to allow him to bring change.

8: 26 AM: Here are the latest visuals from Ludhiana as the counting of votes for the Punjab elections have begun. Postal ballots are being counted first.

8: 18 AM: This time it’s Captain Amarinder Singh VS Parkash Singh Badal in Lambi. Both of them are all set to lock horns for the Lambi seat. Badal has been holding the Lambi seat 1997. Will the tradition be broken this time?

8:09 AM: People are going all out to extend their support for Arvind Kejriwal’s Aam Aadmi Party and are hoping for a massive change in the state. Good wishes are pouring in for the Delhi Chief Minister.

All the best to all AAP Candidate at Punjab n Goa…

8:00 AM: Counting of votes for Punjab begins. Counting has begun in all the 54 centres at 27 locations in Punjab for 117 assembly seats. 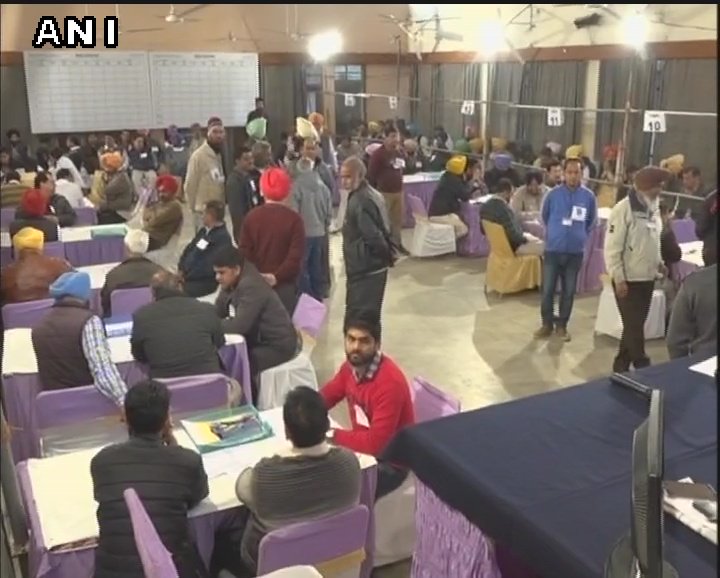 7: 56 AM: Miffed with how Punjab has become synonymous to the drug menace, a large number of NRI volunteers had campaigned the AAP in Punjab and had even urged the voters to give Delhi Chief Minister Arvind Kejriwal a chance to revive the state. Will Punjab be successful in making the change it needs?

7: 45 AM: Soon after the exit polls were released, a number of people across the country are rooting for Punjab, However, some still believe SAD might pull off another win in the state. Meanwhile, here’s what Twitter is saying:

Looking for AAP’s entry in another state. Do well in punjab and start showing their presence in other states. #AAPJeetRahiHaiPunjab

@BhagwantMann All the Best. Hopefully AAP is going to form gov’t in Punjab.

# Punjab recorded a high voter turnout of 77.4 percent in the February 4 election to decide the fate of 1,145 candidates. As per the exit polls, AAP is expected to be a game-changer in the state. Will Arvind Kejriwal manage to pull off a historic win in Punjab?

# Aam Admi Party (AAP) led by Arvind Kejriwal had vowed to end drug menace during his election campaign and lashed out at the BJP-Congress for failing to control the drug trade in the state.

#Capt Amarinder Singh-led Congress is giving a tough fight to Arvind Kejriwal’s AAP. However, AAP has not yet announced its chief ministerial candidate.