The single phase Punjab elections were held on February 4 with the ruling Shiromani Akali Dal facing a tough fight from Congress and the Aam Aadmi Party (AAP). Both the Congress led by former chief minister Capt Amarinder Singh who has stated that he would be fighting the elections for the last time, and the AAP for which Delhi Chief Minister Arvind Kejriwal ferociously campaigned raked up the issue of the growing drug trade that has been prevailing in the state under the present government.

There was hectic campaigning by all main political contenders including SAD, Congress, and AAP. However, the SAD-BJP alliance which won the assembly polls in 2012 faces a tough challenge of anti-incumbency in 2017.

After several rounds of parleys and discussions, former Bharatiya Janata party (BJP) leader and former cricketer Navjot Singh Sidhu had joined hands with Congress vice president Rahul Gandhi. The cricketer-turned-politician declared himself a “born Congressman” after joining the Congress. The former BJP leader had given up his Amritsar seat for Arun Jaitley in 2014 Lok Sabha elections. He left the BJP amid speculations that he would become the chief ministerial face of the AAP in Punjab. However, the discussions could not materialise with Sidhu forming a new forum. He later joined the Congress.

The AAP which was looking very strong in the state initially is now facing a tough time after its state chief Sucha Singh Chhotepur was expelled from the party. Though Arvind Kejriwal campaigned for the party excessively, it has not announced a chief ministerial candidate.

Here’s the region-wise analysis of Punjab by CVoter:

Well, what do you think?

Exit polls were against #AAP during #Delhi election too. So, will this new party spring surprise in #Punjab and #Goa ?? #ExitPolls2017 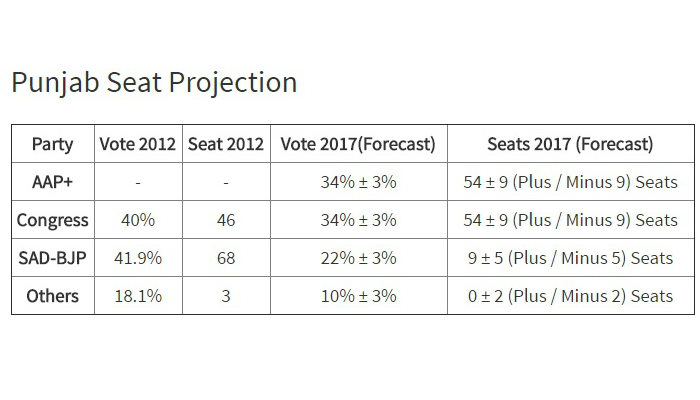 In Punjab, AAP is forming the government by winning 59 to 67 of the 117 assembly seats, said India TV CVoter.

As per Today’s Chanakya, both AAP and Congress are getting 54 seats each, followed by SAD-BJP alliance at 9 seats.

Did Rahul Gandhi’s meeting with the Sangrur locals help Congress to make a strong foot-hold this time? Read this: Rahul Gandhi assures strict law against drugs to Sangrur people

After two full terms, BJP-SAD’s alliance is ready to be thrown out of power with just 4-7 seats. While AAP has made its presence felt with 42-51 seats, it’s Congress which is emerging as the clear winner at 62-71 seats.

While questioning the accountability of India Today-Axis My India India Exit poll, AAP spokesperson, Raghav Chadha said that AAP will win with a thumping majority in Punjab, and will garner nothing less than 85 per cent of vote share.

Raghav Chadha questions the accountability of these exit polls.