The fate of the parties contesting has been sealed! The state has witnessed a hung assembly.The polling in Goa held in single-phase for 40 assembly seats on February 4 in which the Bharatiya Janata Party has fielded candidates in 36, AAP in 39, Congress 37, Maharashtrawadi Gomantak Party 25 and the NCP in 37 seats. As predicted by the exit polls released on March 9, the BJP will emerge as the single-largest party and retain their governance. The Congress, according to its state President Luizinho Faleiro, will emerge victoriously. This is the first time that Aam Aadmi Party has contested in the Goa polls.

5: 54 PM: The Aam Aadmi Party, which ran a high-profile election campaign in Goa, has not been able to secure a victory in the state assembly polls here yet.

2: 00 PM: Goa appeared headed for a hung assembly on Saturday with the Congress and the BJP both winning seven seats each and also leading in two seats each.

12: 50 PM: Here is the list of the winning candidates and their constituencies:

12:40 PM: As per the Election commission, here are the latest statistics. 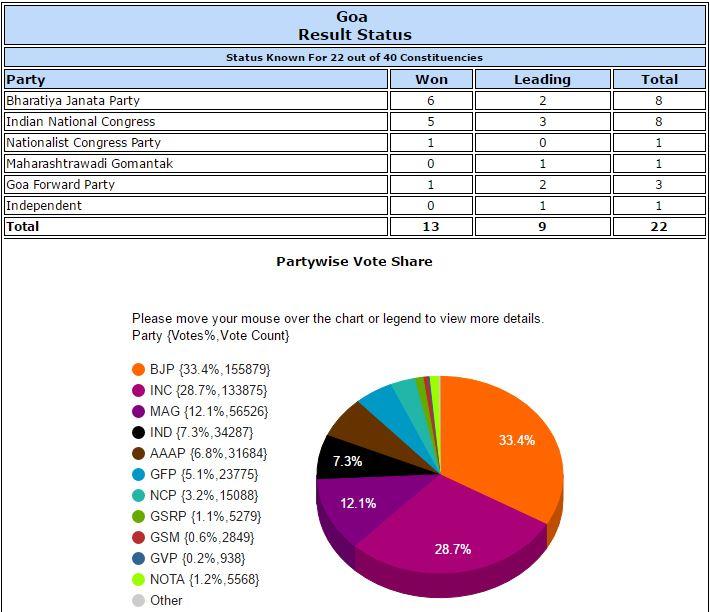 12:25 PM: Another victorious move from Goa Forward. Vinod Paliencar defeats BJP’s Dayanad Mandrekar in Siolim. It has been a neck-to-neck fight for BJP with Congress. The picture is yet to be get cleared. Keep following us for the latest election results as they unfold.

12:10 PM: And the table turned for Congress. After a bit of drama, Clafaso Dias wins in Cuncolim after a recount after defeating Joaquim Alemao by 149 votes.

12:00 PM: A demand for recount. Congress’ Clafaso has asked for a recount after he lost to Joaquim by 50 votes.

11: 57 AM: AAP CM candidate for Goa, Elvis Gomes who was at third position in Cuncolim loses to an independent candidate,  Joaquim Alemao.

11:10 PM: Tougher for BJP but toughest for AAP. No good news for the debutant party. AAP CM candidate for Goa Elvis Gomes currently at third position in Cuncolim

10: 50 AM: BJP’s Michael Lobo is leading in Calangute against Congress’ Joseph Sequeira.

10:45 AM: A massive downfall for CM Lakshmikant Parsekar. Trailing by over 4000 votes, his journey towards victory ends. He sadly moved out of the counting centre and refused to talk to media.

10:30 AM: Another victory. In Benaulim, Churchill Alemao has won after defeating the Independent candidate backed by the BJP Caetano Silva. AAP stands at the third place.

10:05 AM: And it’s MGP who marked the first victory in Goa. In Sanvordem constituency, MGP’s Dipak Pawaskar defeats BJP’s Ganesh Gaonkar (based on the difference of votes left)

10:00 AM: As per the Election commission, here are the latest statistics. 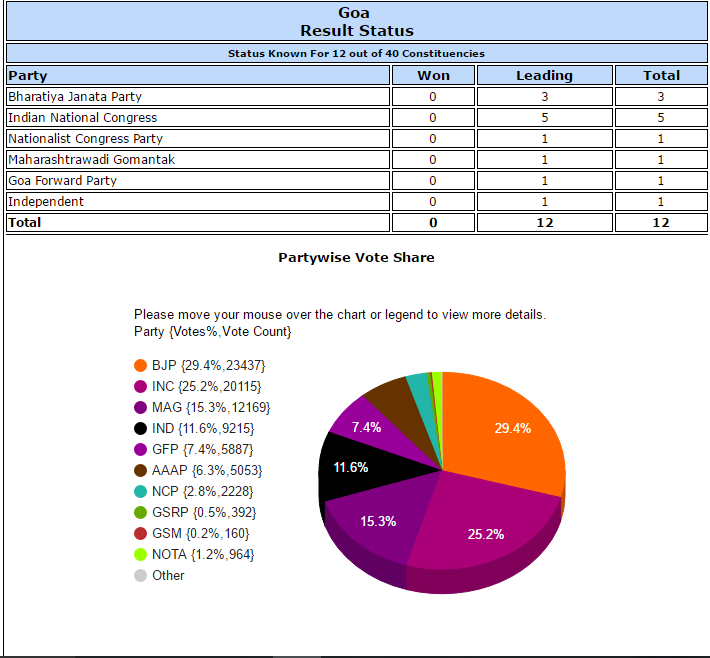 9:55 AM: A total disappointment for AAP in Goa. The broom has failed to do anything special on its debut. NCP’s Curchill Alemao is leading against AAP’s Royla Fernandes in Benaulim

9:50 AM: Tough time for the saffron army on Goa. Has the Modi Wave been frozen? Congress candidates Chandrakant (babu) Kavlekar and Subhash Shirodkar are leading in Quepem and Siroda respectively.

9:45 AM: The exit poll predictions seems to be going upside down. Unlike the verdicts, its Congress moving ahead steadily. Congress’ Francisco Silveira is leading against BJP’s Ramrao Wagh from St Andre.

9:40 AM: Good news for BJP from Mormugao as Milind Naik is leading against Sankalp Amonkar. From Taleigao constituency, Congress’ Jennifer Monserrate is ahead.

9:35 AM: Congress’Pratapsing Rane is now leading by 4174 votes. From Fatroda, Goa Forward’s Vijai Sardesai is leading. Damu Naik is trailing by 1059 votes.

9:20 AM: From the Priol constituency, an independent candidate Govind Gaude is leading against MGP’s Pandurang Dhavalikar who is trailing by 1281 votes.

9:15 AM: Congress candidate Dayanand Sopte is leading by 3962 votes. A big blow coming towards Mr. Parsekar could be sensed. But there is still time for a clear picture. Keep following us for the latest election results as they unfold.

9:08 AM: As per the early trends, from Siolim, Vinod Paliencar of Goa Forward Party is by 650 votes.  BJP’s Dayanand Mandrekar from is trailing. BJP’s Pravin Zantye from Mayem is leading in the first round.

9:05 AM: Congress’ Dayanand Sopte is leading by 750 votes from Mandrem constituency. He fought against Goa’s current Chief Minister Lakshmikant Parsekar who won this seat in the 2012 election. But now, when the Congress candidate is ahead, BJP needs to worry a bit.

8:50 AM: In this elections, there is a must win situation for Congress. Last time, it won only 9 seats. Anything below that this time will perhaps signal an end to the party’s prospects.

8:45 AM: Latest trends: (3/40) – Congress: +2, Others: 1. These are the latest trends as of now which shows Congress opeening there account. We are waiting for the leads on the rest of the 37 seats. Keep following us for the latest election results as they unfold.

8:32 AM: Counting is underway in Goa. Who will win control of the 40 member house should be clear in a few hours. Keep following us for the latest election results as they unfold.

8:20 AM: Apart from the exit polls, here comes an astrology prediction showing the number of seats to different parties. The ballot boxes have been recently opened which will clear the picture after few hours. Keep following us for the latest election results as they unfold.

8:15 AM: While the political parties have kept their fingers crossed, people on Twitter are pouring their wishes for BJP and AAP. Some are wishing BJP should come to powers in Goa while supporters of Aam Aadmi Party are also on the run.

Let us all be ready for a huge saffron win!!!
#UP#UK#Goa#Manipur@BJP4India @merijabaan

8:06 AM: The ballot boxes are open now. Keep following us for continuous updates.

8:00 AM: Counting of votes in all the 5 states-Manipur, Punjab, UP, Uttarakhand & Goa, begins. The BJP is hopeful of winning the state and continue its rule for another term.

7:55 AM: Despite exit polls has predicted stated clear win for BJP, Congress still believes that they will emerge as the strongest party. We will get you the latest updates as they unfold.

7:50 AM: The BJP is also expected to hold a party meeting today after which the party will deliver its verdict that who should give up their winning seat if Siddharth Kuncalienkar is to lose the most important Panjim seat.

7:45 AM: The elections commission has set up counting centres in North Goa and South Goa where the counting will be done. The process will start, as said by the North Goa Collector Nila Mohanan, will start at 8: 00 am.

7:30 AM: In Goa, the BJP is hoping of retaining power, in comparison to 2012, this time it’s being expected that the counting would be faster. The number of counting centres has been increased to ten in each district. Thus the leads are can be expected around at 10:30 AM.

7:23 AM: A little over half an hour to go before polling begins across five states. This election result will determine, in a way, who comes to power in 2019. If the BJP wins Uttar Pradesh, it is a clear indication that the Modi wave is back after a lull. So who will ultimately win? Stay tuned to find out.

7:00 AM: The counting is about to commence just in a few hours

# The counting of polls will be carried at two centres in North and South Goa to declare the winners.

#It has been announced by the North Goa Collector Nila Mohanan that the process will begin at 8 a.m. with the counting of postal ballots before votes stored in more than 2,500 electronic voting machines are taken up around 8:30 a.m.the poll officials stated that counting is expected to conclude by early afternoon and the results are likely to be declared before 2 p.m.

# The poll officials stated that counting is expected to conclude by early afternoon and the results are likely to be declared before 2 p.m.

# Among all the 5 poll-bound states, Goa and Punjab were the first where the polling commenced on February 4.

# Approximately 174 candidates from all the major parties have been fielded over 40 assembly seats.

# On March 10, the Goa BJP called for a meeting of core members to finalise a name for the post of CM.

# According to sources, the leaders are figuring out ways to bring Union Defence Minister Manohar Parrikar as CM.

#Aam Aadmi Party, who are fighting for the first time in Goa, have projected Elvis Gomes as its CM candidate.