Next time you use Swiggy to try some delicious biryani or chicken curry from Kerala, you will see an option called ‘Freedom combo meal’ among the food items. What’s special about this combo is that it is being cooked by the inmates of Viyyur Central Prison in Thrissur.
For the past eight years, the inmates have been cooking biryani, chapatis, chicken curry and more and selling them through the prison counters. Owing to its popularity, Freedom Food Factory- an enterprise which sells the food prepared by the inmates of the Thrissur jail – has tied up with the online food delivery giant to sell the biryani combo online.

Freedom combo meal now at your doorstep
The ‘Freedom combo meal’ will consist of 300 grams of biryani rice, a roasted chicken leg piece, 3 rotis, 1 chicken curry, pickle, salad, a bottle of mineral water and a cupcake for dessert. The combo, priced at Rs 127, comes packed in a plantain leaf as well, reported The Indian Express.
Superintendent of Viyyur Central Jail Nirmalanandan Nair said that the idea was the brainchild of Rishiraj Singh, DGP of Prisons.”Our initial plan is to sell about 100 combos a day. If there’s more demand, we will increase the supply. Swiggy said their men can deliver the food in a six-kilometre radius of the prison,” Nirmalanandan told The Indian Express.
At present, the Freedom Food Factory outlet in the Viyyur prison sells about 500 to 700 biryanis and about 25,000 chapatis each day. The food is cooked by close to 100 male inmates of Viyyur Central Prison. The jail also has a female wing, who make traditional Kerala snack items, says a Newsminute report. 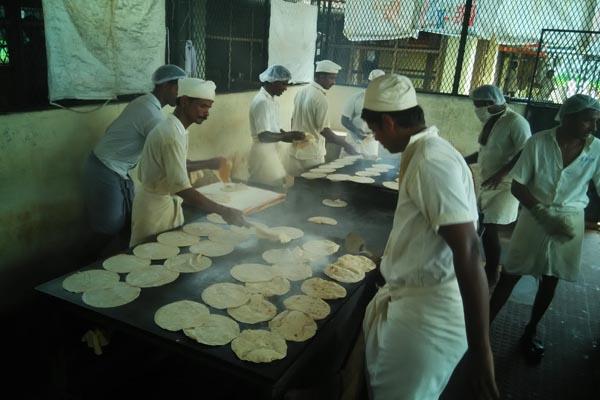 When inmates turned into cooks
According to The Hindu, the Central Prison in Thiruvananthapuram started an initiative called Food For Freedom in 2010, where they sold food made by the inmates at very low costs. A chapati costed Rs 2 and a plate of chicken curry was priced at Rs 20. Soon this initiative became a hit and spread across to other centres in the state.
In 2011, the Viyyur Central Jail in Thrissur rolled out ‘Freedom’ brand and started selling chapatis and curry at a reasonable price. The initiative was aimed at instilling confidence in the minds of the prisoners. According to The Indian Express, the inmates are paid wages to the tune of Rs 150 per day for their work and revenue from the food business goes into refurbishing and maintenance of the jails.