A 101 year-old war veteran has made it to the Guinness Book of world records for being the oldest ever skydiver. Verdun Hayes had served in the Army during the Second World War and was presented with a Legion d’honneur for his valiant actions in Holland, Belgium, Germany and in Normandy.

After completing the enthralling stunt, the former lance corporal exclaimed “hooray” as he touched down, adding that he was feeling “absolutely over the moon”. 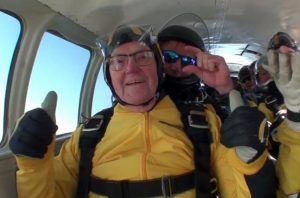 In fact, Hayes made his debut skydive on April 11, 2016-his 100th birthday- breaking the British record. However, he was still behind Canadian Armand Gendreau – who did it at the age of 101 and three days in 2013. The maverick waited for 37 days after his 101st birthday and broke the world record on May 14 2017 by taking the daredevil jump from plane.

During the war, the centenarian suffered shrapnel injuries in his ribs and hands in an explosion that killed his friend.

“How I came home from World War Two I do not know,” UK’s evening standard quoted him as saying. “I was so near to the edge of everything. I lost any amount of friends in no time at all really. I just didn’t think I would ever return home,” he added.

Hayes said he wanted to parachute jump since he turned 90, but his late wife did not let him do so. The maverick  has previously flown gliders, been a county champion runner and even survived a small hot air balloon accident in his eighties.

The great grandfather made the jump with 10 of his family members at an airfield in UK’s Devon. He was accompanied by his 16-year-old great grandson Stanley, while his grandson Roger, 50, son Bryan, 74 and great-granddaughter Ellie, 21, were also among those who took the leap.