A telephone used by German dictator Adolf Hitler has been sold for $243,000 (£195,744) at a US auction. The telephone also called as ‘Hitler’s mobile device of destruction’ was sold by auction house Alexander Historical Auctions. The crimson red phone was found in his Berlin bunker in 1945.

In the catalog, the Nazi dictator’s phone was described as “the most destructive weapon of all time, which sent millions to their deaths.” However, the identity of the buyer has not been revealed. The phone was put up for sale at the auction with bidding starting at $100,000.

The telephone has the name of Adolf Hitler clearly engraved on it in capital letters. The name Adolf Hitler is engraved next to the eagle and the swastika, the symbol of the Nazi Party. 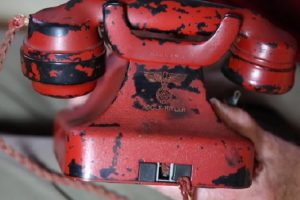 The phone, which Hitler received from the Wehrmacht (Nazi Germany’s Armed Forces) and used during the last two years of World War II in vehicles and trains as well as in field headquarters, was originally black but was then painted a crimson red.

Andreas Kornfeld, vice president of the auction house said, the device, made in Bakelite by the German company Siemens, went to a “private collector from North America”. “It was awarded in a telephone bid, it’s a good price, we’re happy,” Kornfeld further asserted.

A porcelain figure of an Alsatian dog, also owned by Hitler, fetched $24,300.