The engineering fever has latched itself on a commerce student now. This teenager from Navi Mumbai has forged a car of his own creation. 19-year-old Prem Thakur is a first year student of BCom, living in Kharghar, Mumbai. Despite having a commerce background, Thakur says was always been fascinated by cars. Even while continuing with his undergrad program, Thakur felt the need to explore on his interest in engineering.

The first thing he did was look it up on the internet. Little did he know that that was all he needed. He learnt how to build a car of his own from one of the DIY (Do it Yourself) videos on YouTube. Coming from a humbled background, he did not intend on spending money where he could do without it. He studied a few car models on his computer that he has had since he was 12. He then learnt how to make buggy cars from YouTube. After he had the knowledge, Thakur felt inspired to embark upon his own project to build a car.

Utilising a few parts from a second-hand car, Thakur initiated work on his project that would take him 4 months to complete. Right in his own home, Thakur built and assembled the chassis for the car, even welding and painting it all by himself. After a few months, his vision finally manifested itself. Thakur thanks his parents and grandparents, who supported their child’s dream instead of curbing it, and assisted the project financially. Thakur’s father, who is an auto driver, spent 2.5 lakh on the project. 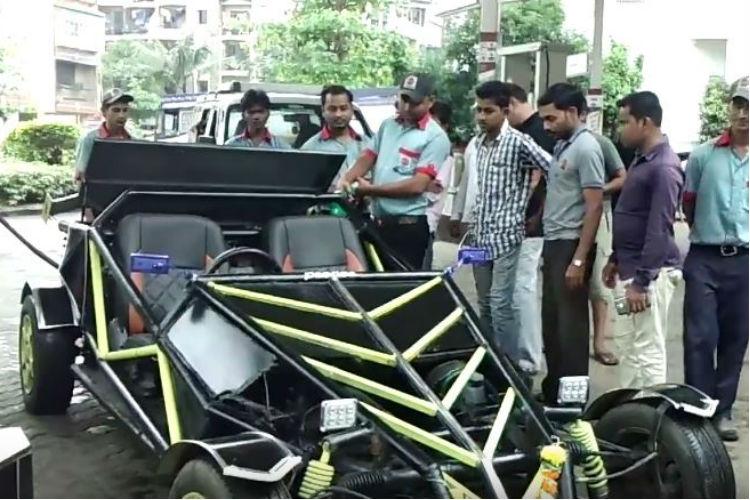 Thakur’s fascinating work draws attention from many locals as he proudly drives his creation on the streets of Mumbai. He only hopes that he could drive his car on a race-track one day. He says he aspires to become and automobile engineer in the future.