Dogs are humans’ best friend, but they can also be their classmates. 25-year-old Brittany Hawley graduated from Clarkson University, New York on December 15 and alongside her was her loyal service dog Griffin, who received his own honorary diploma, wearing adorable robes and hat.

Hawley was diagnosed with Complex Regional Pain Syndrome (CRPS) which left her wheelchair-bound since she turned 16. Griffin has served as her mobility dog for two-and-a-half years and helps her by fetching items, opening doors, turning on lights and by calling a person for help if she is trouble. Griffin attended all the classes, lectures, study sessions, clinical experiences, faculty appointments and research projects as Hawley did, serving as her emotional support.

So, the school decided to honour the four-year-old golden retriever for showing “extraordinary effort, steadfast commitment and diligent dedication to the well-being and student success” of Hawley. According to the University’s statement, the two have “pursued 100% together a graduate degree in Occupational Therapy”. 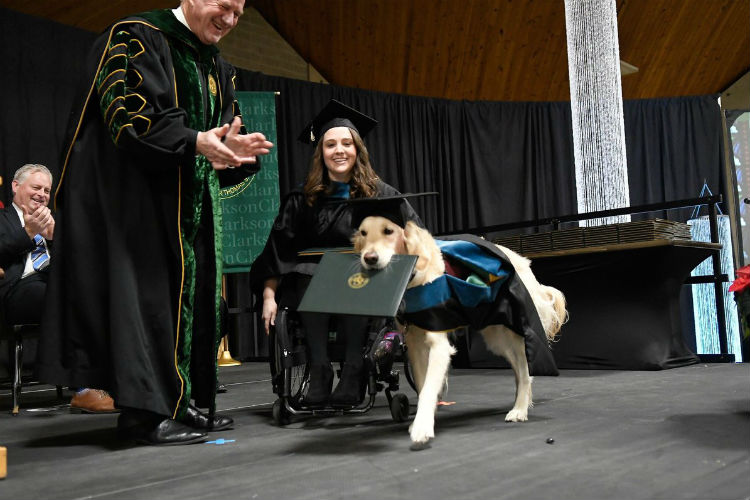 “I can’t wait to see where we go next GRIFFIN! I am blessed that God allowed you to be by my side through the last two and half years. Excited for the adventures ahead of us.”

Both Griffin and Hawley have tremendous support on social media, with many congratulating them both for graduating:

Hope he will go on to get a dogtors degree!