In a first-of-its-kind effort, a kennel has been created for the stray dogs in a Mumbai office. The Tata Group’s global headquarters’ building in Mumbai was under renovation for the last nine months and to mark the 114th birth anniversary of JRD Tata, the Tata group re-opened it on July 29.

The 94-year-old heritage building has been revamped in order to make it ‘reflect the aspirations of today’s employees – modern, agile and collaboration-driven’ according to a press release. But the best part of it is a kennel for the stray dogs living around the area and have been an integral part of the building for decades.

“This is the area where the street dogs living around the area can have a meal, drink water, take shelter from the sun or rain or just chill out,” says the post shared by Save Our Strays, a Mumbai-based NGO.

The kennel looks absolutely fabulous with one wall painted bright yellow, while another covered in black and white doodles of dogs. This latest addition at the Bombay House has extremely impressed the dog lovers.

There are some happier street dogs in the renovated Tata Group HQ Bombay House now that they have a newly built kennel on the ground floor. Dog lover Ratan Tata had adopted stray dogs in the area and made them feel as welcome in the lobby as any other visitor. 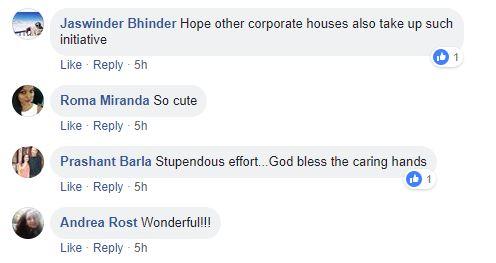