Irish Author Anna Burns has won this year’s Man Booker Prize for her novel Milkman, a timely story about a young woman being sexually harassed by a powerful man.

The 56-year-old received £50,000 award at a lavish ceremony in London Tuesday evening. Set in an unnamed city during the bloody “Troubles” of Northern Ireland, the novel tells the story of bookish 18-year-old girl harassed by a paramilitary figure called the milkman.

“None of us has ever read anything like this before. Anna Burns’ utterly distinctive voice challenges conventional thinking and form in surprising and immersive prose,” philosopher and novelist Kwame Anthony Appiah, who chaired the prize’s panel of judges, said in a statement. 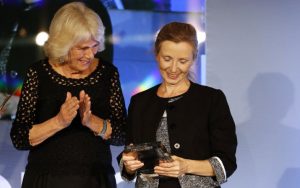 Milkman beat competition from Everything Under by Daisy Johnson – who, at 27, was the youngest nominee in Man Booker history. The other nominees were The Long Take by Robin Robertson, Washington Black by Esi Edugyan, The Mars Room by Rachel Kushner, and The Overstory by Richard Powers.

Milkman is the fourth novel to be written by Burns, who was born in Belfast in 1962. Her debut, No Bones, was published in 2001, and followed by Little Constructions six years later. Her most recent work prior to Milkman was Mostly Hero – a novella published in 2014, BBC reported.

In an interview posted by the Booker Prize foundation, Burns said that “Milkman” was inspired by her own experience. “I grew up in a place that was rife with violence, distrust and paranoia, and peopled by individuals trying to navigate and survive in that world as best as they could.”

Established in 1969, the annual literary prize recognises the judges choice of “the best original novel written in English and published in the UK”.

This year’s shortlist was made up of writers from the United Kingdom, Canada and the United States.