The Pakistani Army will launch counter-insurgency operations against militants holed up on the Afghanistan side of the Af-Pak border, a government minister informed the country’s senate on Monday. According to a report in English daily Dawn, Pakistan’s finance minister informed the parliament that the the security forces would launch targetted operations to take out Islamist militants after finding “concrete evidence.”

Pakistan’s decision risks escalating tensions between the two neighbours, which are already strained since Pakistan started launching rocket attacks across the Durand Line in the wake of Islamic State suicide attack on a Sufi Shrine in Sindh last week. Islamabad says the Islamist militants who carried out the deadly attack came from Afghanistan.

But Kabul over the weekend expressed concern over the ongoing shelling from Pakistan. Afghanistan’s foreign ministry on Sunday said that it would do all in its power to respond to Pakistani aggression if the rocket attacks didn’t stop.

“We hope that Pakistan stops the attacks and that the relationship between the two countries will return to normal. If not, Afghanistan will not sit silent, but will use its internal, regional and international power in response to Pakistan’s actions,” Faramarz Tamana, a high-ranking official at Afghanistan’s Ministry of Foreign Affairs, was quoted as saying by Afghanistan’s TOLO News.

Pakistan’s security forces are going big-time after Islamist militants  after a deadly suicide attack last week that was believed to have carried out by Islamic State. The attack was the fifth terrorist incident reported from the troubled country last week, making it one of the most deadliest seven days for the South Asian country in recent years. 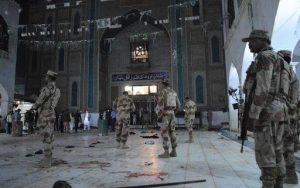 At least 72 people were dead and more than 150 injured in an Islamic suicide attack on the popular Sufi shrine of Lal Shahbaz Qalandar last week.

Pakistan’s influential army reacted powerfully to the attack on the Sufi shrine, claiming that they had killed over a 100 radical Islamists in a security crackdown aimed as payback for recent terrorist strikes. On top of its internal security operation, the Army also launched cross-border strikes in Afghanistan to target terrorist camps Islamabad claims were operating from within Afghanistan.

There were also reports that Islamabad moved heavy artillery to the Afghan border over the weekend. Pakistan’s Air Force has also been carrying operations inside the Afghan territory since last weekend, as reported in Pakistani media.

Also read: Pakistan hands over Afghanistan its list of most wanted terrorists. But what about India’s list of 50 most wanted fugitives in Pak

However, the announcement that Pakistan was going to cross the Durand Line in their fight against Islamist radicals rattled nerves in Kabul.

According to the monitoring group Norwegian Refugee Council (NRC), hundreds of Afghan families had been displaced until Monday in the wake of heavy shelling by Pakistan’s border troops. 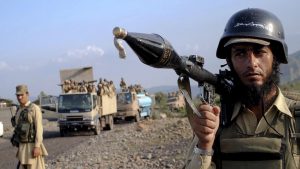 Former president and government minister Abdullah Abdullah was quoted by TOLO News, “Violence across the Durand Line has increased in the past couple of days and it has concerned people on both sides.”