Kuwait hasn’t placed a visa ban on Pakistani citizens, contrary to news reports that have surfaced in sections of Russian and Indian media in recent days.

“There has been free movement of citizens between the Pakistan and Kuwait for the last 10 years. There is no truth in the reports that Kuwait has banned our citizens (from entering the country),” the official told InUth over the phone.

Ahmed Quraishi, a nationalist Pakistani TV host, weighed in the entire confusion saying Kuwait did instate a visa ban on the five countries in 1980, and has been following it ‘on and off’ since. Quraishi was quoted as saying that the ban, though, was suspended for Pakistan.

Quraishi’s remarks indicate that there hasn’t been no visa ban in place on Pakistan nationals in recent times, which corroborates the statement given by Pakistan’s embassy official to InUth.

It was reported earlier this week that Kuwait had placed “restrictions” on people entering from Syria, Iraq, Iran, Afghanistan and Pakistan. Unnamed Kuwaiti officials were quoted as saying that “instability” in the five countries was the reason behind the ban. It was also reported that the travel ban would affect both business and tourist visa holders from Pakistan.

Dubai-based Khaleej Times was one of the few publications that reported that Pakistan was included in Kuwait’s travel ban list, only to retract their original article later and publishing another one with headline “Pakistanis are welcome in Kuwait, says ambassador“.

In India, news agency IANS reported the same story, which was picked up by leading Indian dailies. The fake news article is first believed to have appeared in Russian news agency Sputnik International. 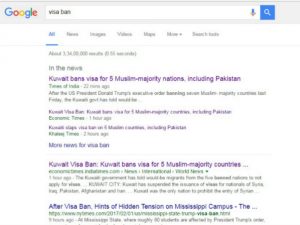 Screenshot of Googled results about fake news article on Pakistan.

In 2011 too, there were reports about Kuwait placing a “blanket” visa ban on citizens from the five countries that included Pakistan. Later, it was learnt that the visa ban applied only to Syrian nationals.

The Pakistan embassy official denied the 2011 report too, saying it was “fake”.

The fake news reports surfaced days after US President Donald Trump signed a controversial order that barred citizens of seven Muslim-majority countries from entering the US for three months, banning Syrian nationals for an “indefinite” period. Pakistan, however, didn’t feature in America’s travel ban list.

Pakistan embassy in New Delhi couldn’t be reached for comment.