India’s stinging response to Pakistan at the United Nations Human Rights Council in Geneva is the talk of the town for more than one reason. The face and voice of India in Geneva was a woman, which, in itself, sends an encouraging message to gender equality advocates across the world.

In fact, a woman has been the face of India at various UN fora of late—at least, since 2016. In September 2016, at the UN General Assembly in Manhattan, Indian Foreign Service (IFS) officer Eenam Gambhir became the heartthrob of the nation after she used colourful phrases in her speech as she took on Pakistan Prime Minister Nawaz Sharif on the issue of Kashmir.

The Indian women diplomats are also becoming experts at calling Pakistan’s hypocrisy at the UN.

At the recent UN Human Rights conference in Geneva, diplomat Nabanita Chakrabarti ripped into Pakistan for accusing India of mistreating its minorities, noting that India’s neighbour had a notorious minority rights’ record.

India at #hrc34
Pakistan must rein in its compulsive hostility towards India and fulfill
its obligation to vacate illegal occupation of POK pic.twitter.com/TkAqel7bC9

(Source: The Twitter feed of India at UN, Geneva)

“…Pakistan has referred to the situation of minorities in India. Minorities in India have been prime ministers, presidents, vice-presidents, senior cabinet ministers, senior civil servants, cricket team captains, Bollywood superstars. Can the minorities of Pakistan claim even a shadow of this? All they have are blasphemy laws and relentless abuse and violation of their human rights,” Chakrabarti said in a carefully drafted response.

And she was definitely onto something. According to Pakistan government’s estimates, a total of 633 Muslims, 494 Ahmadis, 187 Christians and 21 Hindus have been accused of blasphemy since 1987. According to an independent estimate complied by Middle-East broadcaster Al Jazeera, Sunni vigilante mobs have hacked to death at least 68 people in cases of mob justice since 1990.

So, here’s a brief profile of women who are making India proud: 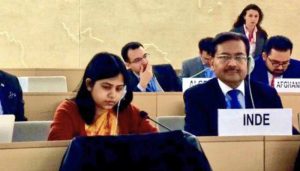 Nabanita Chakrabarti delivered the beautifully articulated Indian statement at the United Nations in Geneva earlier this week, which was made in response to Pakistan’s accusations.

“Apart from becoming the world’s terrorism factory, Pakistan has also alienated its own people through continued mistreatment of Hindus, Christians, Shias, Ahmadiyas and other minorities,” she said during her speech.

According to an Indian Express report, Chakrabarti was the topper of her IFS officers batch in 2008 and presently, serves as Under Secretary at the Ministry of External Affairs.

The IE further revealed that the relatively new diplomat was accompanied by her more seasoned seniors, who are seen sitting next to and behind her while she delivered her speech. And all of them have illustrious backgrounds in either diplomacy or academics. According to the English daily, mentoring Chakrabarti at the UN were Alok Ranjan Jha, a civil services topper in 2002. Besides, there was Ajit Kumar, a nuclear disarmament expert and India’s Permanent Representative at the UN in Geneva. Dr Sumit Seth, a former forensic expert and now a diplomat, was also present alongside Chakrabarti.

Going by the Express article, the speech seemed like a well-planned team effort!

But clearly, Chakrabarti stole the thunder. 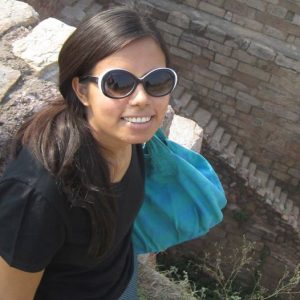 Eenam Gambhir was the lady who dubbed Pakistan as the “Ivy League of terrorism” in her widely circulated speech at the UN headquarters in September last year.

“The land of Taxila, one of the greatest learning centres of ancient times, is now host to the ivy league of terrorism. It attracts aspirants and apprentices from all over the world. The effects of its toxic curriculum are felt across the globe,” Gambhir said during her speech.

Some deal of team-work did go into Gambhir’s speech too, as per news reports.

According to reports, Gambhir is a protege of former foreign affairs ministry spokesperson Syed Akbaruddin, who is now India’s Permanent Representative to the UN. The speech was drafted by Akbaruddin himself, with additions from a joint secretary of political affairs at the UN, Rudrendra Tandon and another Indian government diplomat Sujata Mehta.

The final script of the speech was reportedly edited by then foreign secretary S Jaishankar. 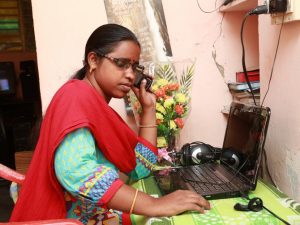 Perhaps, the most inspiring story on this list is of Beno Zephine, a 26-year old IFS officer who secured 343rd rank in the 2013-14 civil services exams.

According to a Times of India report in 2015, the Indian government had to tweak the rules to accommodate her in the elite diplomatic service. She was initially posted as a probationary officer at the state-run State Bank of India.

The report lauded the Modi government for taking a bold call to induct Zephine into the IFS, which otherwise has had stringent vision requirements in the past.

TOI quoted her as expressing gratitude to PM Modi, “I am really thankful to Prime Minister Narendra Modi for taking this big decision. I am told the IFS was not identified for the blind with certain exceptions made for candidates with low vision.”