A series of videos and images showing Pakistan’s soldiers demolishing an entire village has thrown light on Islamabad’s activities in the restive Balochistan province, the site of a six-decade old insurgency against Pakistan’s rule.

According to Baloch Human Rights Organisation (BHRO), the Pakistan government has been forcibly evacuating locals and levelling entire villages to the ground in order to make way for the China-Pakistan Economic Corridor (CPEC). The $46 billion China-sponsored corridor comprises of infrastructure projects linking China’s Xinjiang province to the Arabian Sea port of Gwadar in Balochistan.

In one of the videos, a Pakistani soldier can be seen patrolling a street, apparently trying to keep locals in check as the demolition activity takes place right in front of them.

“The burning down and demolishing of houses serves two purposes for Pakistan’s security forces. First, they are looking to clear land for the CPEC. Then, they also want to pressurize Baloch freedom activists by inflicting huge financial losses on Baloch communities,” the Secretary General at the BHRO, Abdullah Abbas Baloch, told InUth from Germany, where he lives in exile.

Baloch said he was forced to flee Pakistan six years ago after being threatened to tone down his rhetoric on human rights abuses in Balochistan by Pakistan’s security forces.

“The Pakistan Rangers, Frontier Corps and the ISI do most of this dirty work of threatening human rights activists and liberals in Pakistan. The Rangers visited my home in Karachi on several occasions, following which I was forced to fly out of the country,” Baloch said.

The BHRO claims that more than 1,600 activists had gone missing from Balochistan in 2016, also alleging most of the missing persons were forcibly abducted by Pakistan’s security services for protesting human rights atrocities in the south-western state. 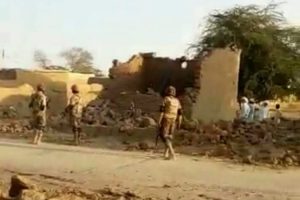 Pakistan Army carrying out demolition of a village to make way for the CPEC. (InUth image)

A report released by BHRO’s chairman Bibi Gul Baloch in the first week of January alleged that at least 113 mutilated bodies of Baloch activists were found dumped at various locations across Balochistan last year.

“Bibi Gul’s house was burned down twice by Pakistani Army to pressurize her,” Baloch revealed.

“Anybody raising voice against Pakistan’s military operations in Balochistan comes on the radar of the security agencies,” he said.

“We strongly believe that Salman Haider has been abducted by security agencies because he was involved with certain activist groups highlighting human rights abuses in Balochistan.” 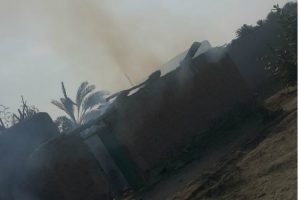 An aerial bombing campaign in progress to level a village to the ground in Balochistan. (InUth image)

Balochistan- a WAR for natural resources 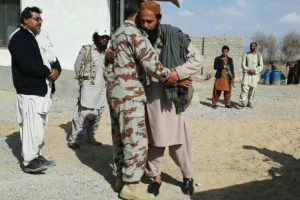