A Japanese worker who ‘habitually’ left his desk three minutes before lunch break was fined thousands of yen and reprimanded for his ‘deeply regrettable’ actions. The 64-year-old, who was an employee at the waterworks bureau in the city of Kobe, slipped away before lunch break 26 times over a period of seven-month period.

Meanwhile, in India, an apology is a far cry.  You are expected to show gratitude if a public official completes your work on time. Indian bureaucracy which was  adjudged Asia’s most inefficient by the Political and Economic Risk Consultancy, Hong Kong, has been notorious for its lack of transparency and labyrinth rules.

However, in Japan, the employee’s transgression prompted four of his senior officials to issue a televised apology for his misconduct. “It’s deeply regrettable that this misconduct took place. We’re sorry,” one bureau official said, as all four bowed deeply. 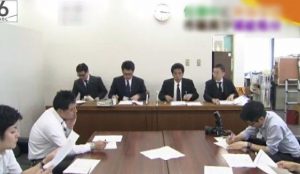 A spokesman for the bureau told AFP: “The lunch break is from noon to 1 pm. He left his desk before the break.” The worker had violated a public service law requiring officials to “concentrate on their jobs”, according to the bureau.

Japan is notorious for its long work hours where people have even died of overwork.

Last year, a young journalist at a public broadcaster died of congestive heart failure after clocking 159 hours of overtime in one month prompting the parliament to pass a bill that caps overtime at 100 hours a month in response to a rise in the number of employees dying from karoshi, or death from overwork, The Guardian reported. In its first white paper on karoshi in 2016, the government said one in five employees were at risk of death from overwork as they work for more than 80 hours of overtime each month, according to a government survey. Employees consider napping in public — or in the office — a badge of honor. It is seen as a sign of diligence and commitment