US Presidential Elections are just a day away and we can hardly contain our excitement about the big day that’s going to change the history of the United States forever. In the past, the two candidates- republican Donald Trump and democrat Hillary Clinton- have launched scathing attacks on each other. While Hillary Clinton
has called Trump Russian President Vladimir Putin’s ‘puppet’, Trump’s ‘Hillary is the devil’ remark has made him quite popular (ehmm..). The duo has battled each other, both on the stage and off the stage, adding fuel to the raging controversies against each other. While Trump’s ‘nasty’ acts are already out in the open, Hillary too has some bones in her closet that over the time have fueled several conspiracy theories about her.

So here are five conspiracy theories about Hillary Clinton that will blow your mind away:

Guccifer, a prominent hacker, whose real name is Marcel Lehar, has described as the ‘high priestess of the Illuminati’. According to YourNewsWire, the Romanian hacker, in his letter from his jail cell in Virginia to Fox News, wrote that though his project ‘Guccifer Project’ failed, his intention was to fully expose the Illuminati and their crimes. “Hillary Rodham Diene Clinton is one of the high priests, a goddess of his occult, satanic, shadow group,” he wrote in his letter.

If that wasn’t crazy enough, there’s more. A Roman Catholic church in San Diego recently warned its parishioners that voting for Democrats is a “mortal sin”.

If the sacred brotherhood indeed exists and Hillary is its high-priestess, are we waiting for a ‘blood ritual’ in the Oval Office (LOL)?! 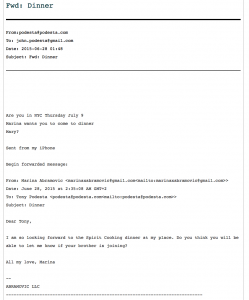 Another conspiracy theory about Clinton suggests that she’s a worshipper of Satan (is that even real!).

According to the documents published by the Wikileaks, Serbian performance artist Marina Abramovic in an e-mail to John Podesta’s (who BTW is Chairman of Hillary Clinton presidential campaign) brother Tony said that she was looking forward to the “spirit cooking” and if John was going to join them.

Chelsea isn’t Bill’s daughter
Whoever came up with this idea either hated the Clintons way too much or didn’t love his life enough. Apparently, Black Bag published an article suggesting that Bill Clinton is sterile and Chelsea’s real father is federal tax evader Webb Hubbell.

Well, now that we think, they do look quite similar.