A disputed sexual assault incident has rocked the country of Ireland after a 27-year-old man was unanimously found not guilty of raping a 17-year-old girl. Protests erupted all over the country upon the verdict which came after the defence attorney said in her closing statements that the accuser had been wearing a pair of lacy underwear, or thongs.

According to the Irish Examiner, defence attorney Elizabeth O’Connell said,

“Does the evidence out-rule the possibility that she was attracted to the defendant and was open to meeting someone and being with someone? You have to look at the way she was dressed. She was wearing a thong with a lace front.”

After deliberating for one-and-a-half hours, the jurors—eight men and four women—unanimously found the man not guilty of rape. 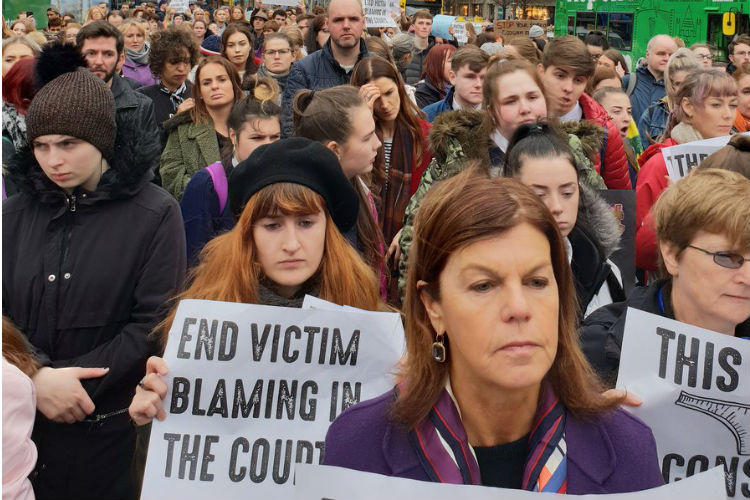 In the Irish parliament, lawmakers displayed lacy undergarments to highlight how clothes were used against women in courts to blame the victims for coming out. Prime Minister Leo Vardarkar also called such defences “absolutely reprehensible” and responded,

Simultaneous protests were held across several cities in Ireland, with demonstrators spreading undergarments on the steps of the courthouse in Cork where the trial took place. On social media, people protested by posting pictures of laced underwear with #ThisIsNotConsent, emphasising that ‘no means no’

To bring a victims underwear into a rape trial as a reason for the rape is beyond despicable. #ThisIsNotConsent #IBelieveHer pic.twitter.com/wZPOqLEzLJ

So just because I or anyone else wear lacy underwear, I’m “asking to be raped?” K next time I see someone wearing expensive jewelry I’m gonna steal it because clearly they’re asking for it #ThisIsNotConsent

What type of underwear a woman wears can be used as evidence in a rape trial, really??? #ThisIsNotConsent @ciarakellydoc @NewstalkFM #Thongs pic.twitter.com/D49XBiJs8t

If I was in a court room as a victim of sexual abuse, I can’t imagine I’d ever be asked if I was wearing boxers or briefs. #ThisIsNotConsent pic.twitter.com/niS9xdR3CU

#ThisIsNotConsent At what point are we going to hold the rapist accountable for being a Rapist … pic.twitter.com/0WbTtbRMkN

Why is this so hard to understand? pic.twitter.com/nl3La22oAe

In the aftermath of the protests, a government review of rape trial procedures is underway.