A young Muslim singer, who became an overnight sensation after she mesmerised judges of a talent hunt show with her voice, was forced to pull out after her past Facebook comments about the 2016 terror attacks in France resurfaced.

Mennel Ibtissem, who is of Syrian origin, earned accolades from the judges of French TV show The Voice for singing her version of Leonard Cohen’s Hallelujah in English and Arabic, AFP reported. A video of the 22-year-old wearing headscarf and singing the famous number went viral and has been watched 1.5 million times on YouTube.

However, her Facebook comments, which she made after the 2016 terror attacks in France, emerged after her acclaimed performance on the programme. 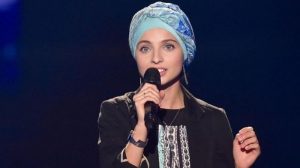 The posts have been deleted but screen grabs of the remarks have been circulated on far-right websites. In one such post, she had expressed doubts about the terrorist nature of the 2016 Nice lorry attack, in which 86 people were killed.

She wrote: “Here we go, it’s become a routine, an attack a week, and, as usual, the ‘terrorist’ takes his ID with him. It’s true that when you’re plotting something nasty you never forget to take your papers with you.”

The message reportedly included the hashtag “#PrenezNousPourDesCons”, meaning “take us for idiots”.

In another post, days after two jihadists barged inside a church in Saint-Etienne-du-Rouvray and slit the throat of a priest, she said: “The real terrorists are our government.”

However, the singer apologised for her past comments saying that she made the remark as she was “upset” by the failure of the authorities to prevent the attack. She also said even her own family members had been celebrating Bastille Day in Nice when the driver attacked.

In a video posted on Facebook in English, she said that she never meant to hurt anyone with her comments and its very idea is painful to her.

“[I’ll] keep spreading my message of peace and tolerance, far from all types of fanaticism.”

In 2016, a cargo truck was driven into a crowd in the French city of Nice that resulted in 86 deaths and hundreds left injured. It was one of the many lone wolf terrorist attacks that rattled Europe and United Kingdom.