Prime Minister Narendra Modi has embarked on a three day visit to Israel to foster ties with the Jewish state. PM Modi’s visit has been hailed as a historic moment for Israel, a country seeking the friendship of powerful allies and customers for its advanced military equipment. On his first day in Israel, PM Modi visited the Danziger flower farm, where a fast-growing Israeli Chrysanthemum flower was named in his honour. The Indian PM was received at the airport by his Israeli counterpart Benjamin Netanyahu on Tuesday, who called him “my friend” and welcomed him saying, “Aapka swagat hai, mere dost”. Later he also went to Yad Vashem, to pay tributes to the victims of Holocaust. Raising the issue of terrorism here, the PM said, “Yad Vashem tells us that those who believe in humanity and civilised values must come together and defend it at all costs. As such, we must resolutely oppose the evils of terrorism, radicalism and violence that plague our time.” Given it’s the first visit of an Indian prime minister to Jerusalem, it has got wall-to-wall coverage in the Israeli media. 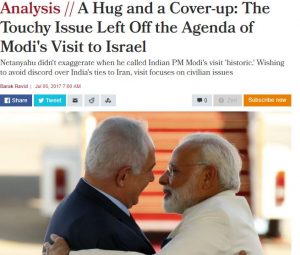 An opinion  piece in Haaretz hailed the PM Modi’s visit as historic and his itinerary as unusual. “The subjects to be discussed are almost entirely civilian – a visit to a flower farm and discussions on cooperation in agriculture, talks on joint space projects and meetings with dozens of directors of companies in the private sector to encourage business. This is refreshing normalcy around here,” it said.

However, it also raised the terror attack on Israeli diplomats carried out near Prime Minister’s Office in New Delhi five and hald years ago and India’s inaction over it.

“There is terror that the Indians are not anxious to discuss. Five and a half years ago, Iranian agents carried out an attack against Israeli diplomats in New Delhi – within spitting distance of Modi’s office. The wife of the Defense Ministry attaché in India, Tali Yehoshua-Koren, was wounded in the attack .”

“In the months after the attack the Indians investigated and even arrested and indicted an Indian citizen on suspicion of assisting the assailants. But a short time later the Indians let the investigation disintegrate. The suspect was released and no verdict has been issued to this day,” it added.

Another opinion piece in Haaretz detailed the evolution of India-Israel relations in more colourful terms: “Israel has long complained that India treats it like a mistress: glad to partake of its defence and technology charms, but a little embarrassed about the whole thing and unwilling to make the relationship too public.

“With Narendra Modi’s visit to Israel starting on Tuesday…it will be like the two countries arriving hand in hand to opening night of the opera season, lit by a barrage of flashing cameras.” 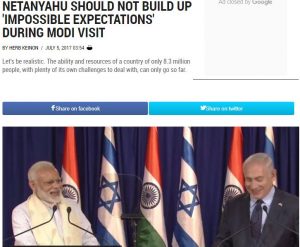 “Modi has embarked on an ambitious plan to lift his nation to a new level, and he has identified Israel as a country that can help him do that. Which is flattering. But let’s be realistic. The ability and resources of a country of only 8.3 million people, with plenty of its own challenges to deal with, can only go so far. Netanyahu would be wise in not overstating what Israel has, or is able, to offer – either to the Indian leader or to the heads of African states he now meets on a regular basis. Otherwise, and despite his best intentions, he may end up with angry and disappointed customers,” it said. 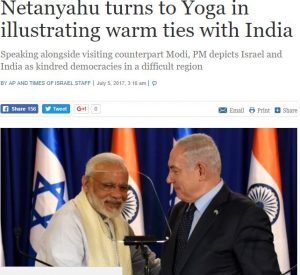 The Times of Israel noted that Israeli PM has cleared his schedule to be at Modi’s side throughout almost the entire visit in view of its importance.

“This kind of attention by an Israeli prime minister is usually reserved for American presidents,” it said.

A blog in The Israeli Times says PM Modi’s visit to Israel may be opportune to discuss Chabahar, an Iranian city where India wants to build a port to establish its defence presence. The writer argues: “Israel seeing eye-to-eye with Iran is unlikely given their past and the recent Saudi-Qatar rift. However, Israel is actively looking to further its relations with India. In that context, whatever benefits India may, in turn, benefit Israel, even if indirectly through Iran.” 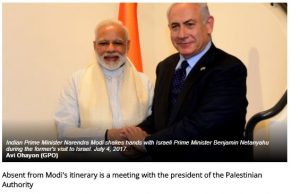 While i24news highlighted that a visit to Ramallah is absent from PM Modi’s itinerary.

“Yet conspicuously absent from Modi’s itinerary is a meeting with the president of the Palestinian Authority, Mahmoud Abbas. Last year, when the Indian president and foreign minister visited the region, both met with Abbas,” the media house noted.