McDonald’s was  left red-faced after a tweet from its official handle targetted US President Donald Trump calling him “a disgusting excuse of a President.” The tweet that also called for return of former president Barack Obama was briefly pinned to the top of company’s corporate account and then deleted.

“@realDonaldTrump You are actually a disgusting excuse of a President and we would love to have @BarackObama back, also you have tiny hands,” the tweet read.

The fast food chain later apologised for the tweet and claimed that its official handle was compromised. 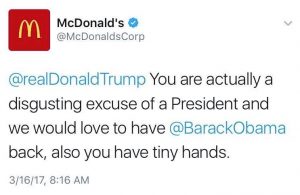 “Based on our investigation, we have determined that our Twitter account was hacked by an external source. We took swift action to secure it, and we apologize this tweet was sent through our corporate McDonald’s account,” McDonald’s spokeswoman Terri Hickey said in a statement. Interestingly, Trump posted a picture of him eating McDonald’s french fries while on his jet on Instagram last year.

With a very polarised social media, the controversial tweet on Donald Trump created a lot of buzz on the micro blogging site.

Here is how twitter reacted to the entire fiasco on Trump

.@McDonaldsCorp Officially Tweets #PresidentTrump @POTUS_”You Are A Disgusting Excuse Of A

If you think the “hack” at #McDonald‘s was incidental, keep in mind their current communication director was Obama’s press secretary.

__ #McTrolls __
They act like a #boycottMcDonald gonna deprive THEM of their #FakeFood _
Eat what you want Troll
I don’t care
Just go away _ pic.twitter.com/Yt8oxKcIhX

#boycottMcDonald not just because they trashed @POTUS but because their food trashes your body.

With the growing influence of Twitter and other social media sites, Hacking has become a new tool to propagate an ideology or message to masses. The hacking comes just one day after hundreds of Twitter accounts including Justin Bieber’s and Forbes were hacked.