Imran Khan, the cricket legend turned politician is on his way to become Pakistan’s 18th Prime Minister. Well, it would be interesting to see how Khan would handle country’s top job given his reputation of a politician who has more often than not stooped to unexpected levels of misogyny with impunity.

In a TV interview last month, Khan had claimed that the Western concept of feminism has “degraded the role of a mother”.

“A mother has the biggest influence on children… I disagree with this western concept, this feminist movement, it has degraded the role of a mother. My mother had the greatest impact on my life,” he had said.

This only understates his bleak understanding of terms like feminism and motherhood even if we ignore the fact that his own children including Tyrian White from his one time fling Sita White, were single handedly raised by his first wife Jemima Goldsmith, a western woman.

In 2012, Khan had opposed reservation for women in Pakistan’s parliament. Though it’s quite understandable if one disagrees with women quota on some reasonable grounds, but the words Khan chose to use express his disapproval shows his indignation towards women. 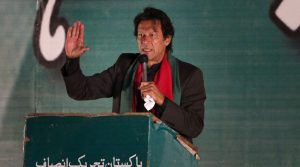 “Legislators in assemblies are representatives of the people. How can some women be representative of women when they haven’t even contested elections? In some areas it is not possible for women to contest elections, but political parties should hold elections within their ranks and promote women into higher leadership positions,” Pakistan’s Express Tribune quoted him as saying. He said his party would empower women but not “in the Western sense.”

Unsurprsingly, his remarks drew fierce criticism from women parliamentarians belonging to both sides of the political aisle in the lower house.

“Asma said that women attend the PTI sit-in to dance when she herself dances on her visits to India. I think she has become friends with the Jamiat Ulema Islam-Fazal (JUI-F) chief,” he told the crowd. “Asma speaks with the permission of the United States.”

Khan has also faced sexual harassment allegations from his ex-party worker Ayesha Gulalai, who accused him of sending her obscene text messages from his Blackberry since 2013, in the full knowledge that the messages could not be hacked.

Gulalai not only had to quit Imran’s party, she had to bear personal attacks from her ex-party members with one PTI spokesperson wanting to know why her sister was “running around in shorts” and whether this was part of Pakistan’s culture. As usual, shame of sexual harassment still largely looms over the victim.

Notwithstanding the damning allegations made by his ex-wife Reham Khan in her autobiography which includes his efforts to completely dominate her while they were married or what he thought of women with whom he have had sexual escapades.

“…The most famous story, of course, was that of a Bollywood superstar of the ’70s. Considered to be one of the sexiest heroines of all time, there had been rumours of Imran and her. We had heard these whilst we were growing up. Imran confirmed to me that they were true. Though Imran was happy to sexually engage with actresses, he and the family clearly thought little of them,” Reham Khan wrote in the self-titled autobiography.