Nothing moves India like cricket does, isn’t it? Well, it is not for nothing that the sport is literally a religion in our country, after all. So here is some hilarious Yuvraj Singh to brighten your day up.

As a part of the series ‘Breakfast With Champions’, anchor Gaurav Kapur paid Indian cricketer and childhood friend Yuvraj Singh a visit and believe us the interview sounded simply like two friends meeting after ages. It started off with Gaurav making his way straight to the kitchen and Singh following in his footsteps to prove he is capable of boiling water. What follows soon is how childhood friends discuss life after marriage, pretty much taking their own case at every step. 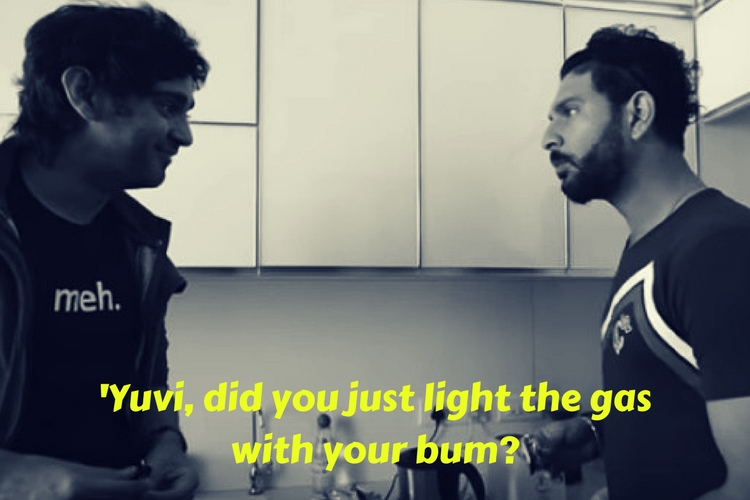 Gaurav picks up a mug saying ‘Mr. Right’, and asks Yuvraj if he does not feel more like ‘Mr. Wrong’, and ‘Mr. get out of the house’, ‘Mr. don’t talk to me’ follow through. This is only one of various hilarious conversations that go down between the two. Dressed in a pair of shorts and a t-shirt, Yuvraj is pulling off one of his most casual appearances on camera with this interview. Yuvraj spills the beans on how Virat Kohli is the second biggest ‘kanjoos’ and Ashish Nehra tops the list. He does not wrap this list up  before making it clear that he is the most generous and is always paying all the food bills. Upon being asked to not enter the kitchen unsupervised, Yuvraj is quick to announce he does not belong in the kitchen. But wit belongs as much to Singh’s wife Hazel Keech’s side and she retorts with a ‘I do not belong as a wife, but we all make mistakes.’

We shall now refrain from giving out any more puns from this interview and leave you to find out the rest on your own. From reminiscing old days to asking how Singh battled cancer to who is the stingiest in the Indian team, this is one interview you should not miss irrespective of whether or not you are a sports buff. So, go ahead and give these two a watch.