The world is online. And the online world is full of fashion blogging and makeup tutorials, and many new weird trends. While we accept that there are some exceptional fashion bloggers who have taken the internet by storm with their amazing hacks and makeup looks. But then most of them just present an extremely weird outlook. Sure makeup is a way of life and shouldn’t be judged, but things are getting truly out of hand. Some of the weirdest looks done by makeup artists are rainbow makeup, glittery eyebrows, feather nails, and so on.

Comedian Tanya Hennessy recently took a dig at the high-end makeup artists by posting a hilarious parody of makeup tutorial on her Facebook page which she captioned as “REALISTIC Makeup Tutorial”  and asked her fans to “tag someone who has no idea with makeup/has mascara from 2004 they still use.” 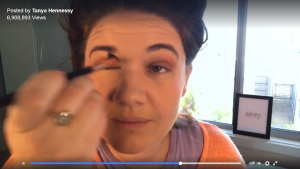 In the video, Tanya is seen doing “everyday makeup routine” which is extremely paradoxical as she uses zillion products and has no idea about it. The best part of the whole clip is where Tanya explains that she uses MAC primer because “a lady sold it to me against my will” and “she was really attractive so I was threatened by her”.

The video is seriously the best thing you’ll see today. Her Facebook post has received more than 129k views and garnered amazing responses from the viewers. While all is said in the glory of this goofy parody, I am sure the only people sulking would be makeup bloggers and artists. 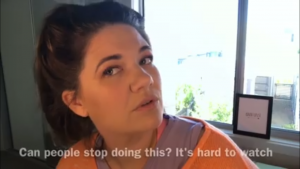