Donald J Trump’s Twitter presence has often made as much news as the US-President elect himself. Apart from his controversial statements and usual misogynistic self, what has also kept him in headlines has been his relationship with his eldest daughter Ivanka Trump.

The doting father took to Twitter on Monday night to live-tweet his his daughter’s interview with CNN and ended up a compliment meant for Ivanka Trump at Ivanka Majic’s handle instead. Not that he has ever shied away from complimenting his daughter, what with him having said he would totally date her if she wasn’t his daughter.

In his excitement to tell the world how Dr. Lawrence Goodstein considered his daughter to be of immaculate character, Donald Trump tagged the wrong Ivanka.

“@drgoodspine: @realDonaldTrump @Ivanka Trump is great, a woman with real character and class.”

The Ivanka who had been tagged has been facing this uncalled for fame ever since her namesake’s father started running for the US Presidential Elections. One can only imagine how miffed she must have been at receiving notifications for a compliment that was not even meant for her. 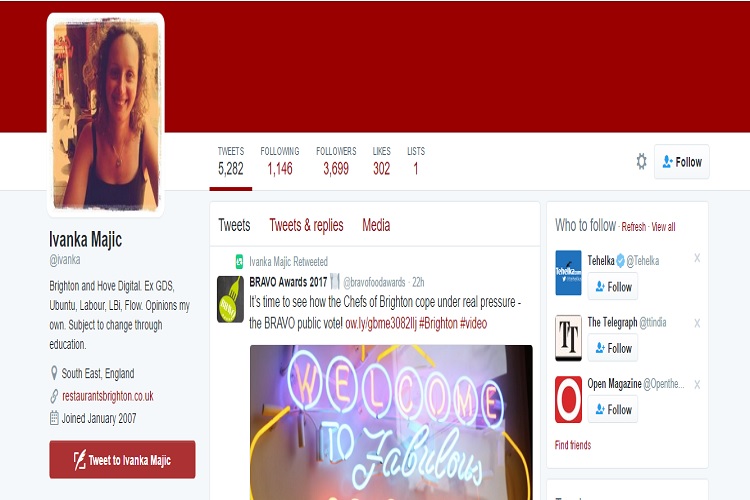 Ivanka Trump’s handle is named @IvankaTrump and Majic’s reads @Ivanka, but the social media misfire has amused Majic for long. Majic happens to be a Labour party supporter and has often had fun replying to such misdirected tweets.

In an earlier tweet, Trump seemed concerned about how the interview would go.

At 9:00 P.M. @CNN, of all places, is doing a Special Report on my daughter, Ivanka. Considering it is CNN, can’t imagine it will be great!

Who knew he’d be concerned enough to do whatever it takes to make it great, at least for Twitter!