A programming genius, she launched CoderBunnyz, a company that uses board games to teach kids all necessary concepts of computer programming.

Samaira’s began coding at the age of six, when most of the kids are learning their alphabets. She was just eight when she built a game called CoderBunnyz to help teach other kids how to code. The game earned her national recognition, and she began holding workshops for kids. She’s even held workshops at Google. So far, she has conducted over 60 workshops in Silicon Valley, which has been attended by over 2,000 kids. Samaira’s STEM game was being used in 106 schools as a coding tool within the first year of its launch. 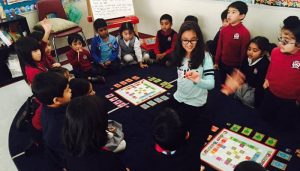 Samaira was ranked second in the Think Tank Learning’s Pitchfest in 2016 post, for which she appeared in a video with Cartoon Network as the ‘real Powerpuff Girl’ inspiring not just those of her age.

She has attended events by technology giants like Google and Microsoft as a keynote speaker. In fact, Google was so impressed by her, they offered to give her a job after she completes her college, but the young entrepreneur refused since wants to run her own company instead. Born to Indian parents, the grade 4 student lives in San Francisco Bay area. She also runs a charity fund named PATH to end homelessness.